The number of confirmed covid-19 infections has risen sharply in Russia in recent weeks. Case growth has been fastest in Moscow, but St. Petersburg has also seen a rise in infections. Between mid-March and early June, the officially reported daily covid case numbers remained below 10,000, but in recent days that number has jumped to over 15,000 a day. Relative to its population Russia’s current covid situation (about 110 cases daily per million inhabitants in the third week of June) is substantially harder than in most European countries (although e.g. the UK is back up to a rate of about 150 cases a day per million). Finland is currently seeing about 15 infections a day per million. Notably, the rise in covid cases in Russia is stretching hospital capacity.

Even with this new wave, Russian officials have been unwilling to significantly restrict people’s movements or limit their access to different services. The exception is foreign travel, which remains highly controlled in various ways. However, some regions have imposed their own restrictions. In Moscow, for example, the opening hours and maximum capacity of bars and nightclubs is limited and certain public spaces have been closed altogether. Many municipalities across Russia are limiting access to certain events to people who can produce documentation of vaccination or recovery from covid.

The situation is complicated by the fact that Russians are quite reluctant to get vaccinated against a possible covid infection – even if all of them can currently get vaccinated. At the end of last week, only about 20 million Russians (slightly less than 14 % of the Russian population) had received at least one dose of vaccine. Slightly over 16 million people have received both of the two doses. Officials have launched a wide variety of incentives to get people to take the Sputnik V vaccine. For example, in Moscow and the surrounding Moscow region, instructions require that at least 60 % of workers be fully vaccinated in service branches that require physical proximity to customers. Many Russian regional governments have also announced that public sector workers are expected to get vaccinated. In several covid-themed surveys, Russian respondents said they believed their vaccine hesitancy was justified as e.g. the epidemic was already over or they worried vaccines might have harmful side-effects.

Covid-19 vaccination rates in select countries: At least one shot by June 21, 2021, share of population (%) 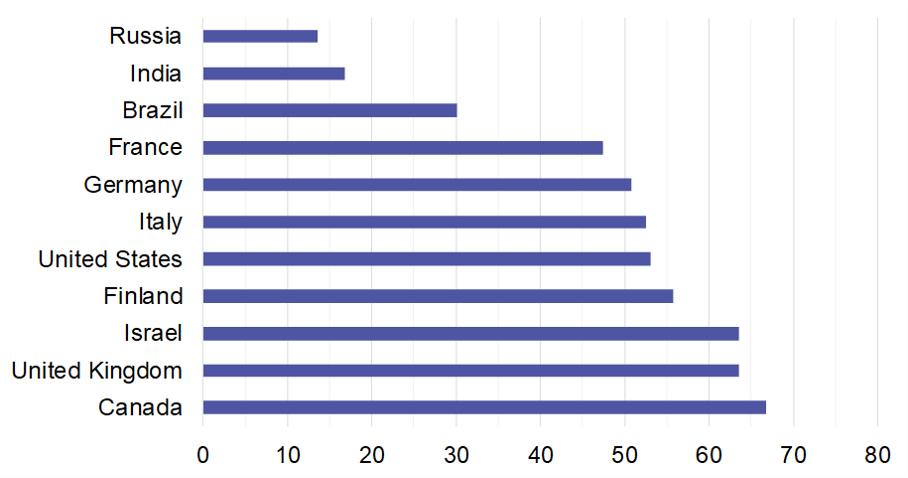 Sources: Our World in Data and BOFIT.