Based on April reporting, the economy followed a bifurcated trend. On-year growth was high due to last year’s low covid crise base. Even so, retail sales growth, a rough indictor of domestic consumption, have yet to return to pre-covid levels. While retail sales in April were up by 16 % y-o-y in real terms, it was up by just over 5 % from April 2019. That translates into average growth of less than 3 % a year. April retail sales growth in month-on-month terms slowed sharply from March.

It is impossible to get a consistent picture of the trends in fixed asset investment (FAI) from China’s official monthly statistical releases (see BOFIT Weekly 52/2020). According the reported official on-year growth figures, FAI rose by 8 % in nominal terms compared to January-April 2019. Based on yuan-denominated FAI figures, however, investment fell by 8 % in the same period. (The discrepancy may be due to a fact that the NBS does not revise the historical series for yuan-denominated investment when it makes changes to the sample of corporations.) The NBS also releases seasonally adjusted month-on-month growth figures. The series history changes significantly, however, from one month to the next, and they give completely different picture than the year-on-year figures. For example, if FAI is calculated based on the month-on-month figures released in April, the level of FAI is still 11 % lower than in April 2019.

Industrial output, which recovered rapidly from the covid shock, has grown a bit faster this year than before the covid crisis. Industrial output was up by 10 % y-o-y in April and up by 14 % from April 2019 (average growth of nearly 7 % a year). On-month growth slowed slightly, however, from the first months of the year.

Foreign demand has supported industrial output. Indeed, the on-year growth figures for foreign trade this year have been stunning. The two-year average annual growth in the value of exports in dollars was 17 % in April (14 % in January-April). Import growth has also revived, but still slightly lag export growth (two-year average annual growth was 11 % in April and 12 % in January-April).

Production of steel and aluminium hit record levels in April, even if producers had been asked to limit their production to reduce emissions. The production restriction plans, higher world market prices and speculation have contributed to higher commodity prices in China. This has been reflected in producer prices, the rise of which accelerated in April to 6.8 % y-o-y (4.4 % in March). Consumer prices, however, rose by a modest 0.9 % y-o-y in April (0.4 % in March).

Based on two-year average growth, retail sales have slowed significantly from the pre-covid period 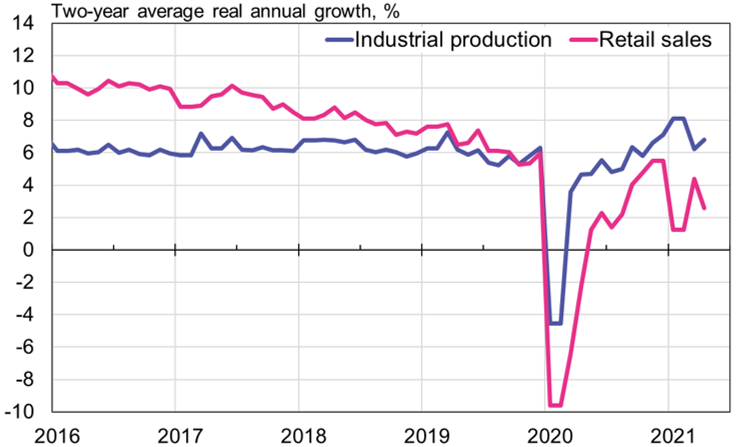