Preliminary figures show Russian GDP contracted by about 1 % in the first quarter of this year. In the fourth quarter of 2020, GDP was still shrinking by about 1.8 % y-o-y (BOFIT Weekly 15/2021). While the more detailed GDP figures have yet to be released, it is possible to conclude from other economic indicators that seasonally adjusted first-quarter GDP growth was positive relative to the final quarter of 2020. Notably, Russia’s seasonally adjusted GDP had already begun to contract in the latter half of 2019 before the covid pandemic suggesting that the Russian economy is experiencing also problems unrelated to covid-19. In the fourth quarter of 2020, GDP was 4.2 % less than in the second quarter of 2019.

Industrial output rose by 7.2 % y-o-y in April, while the on-year change was still −0.9 % in the first quarter of this year. The on-year change for many economic components is likely to be quite large in coming months as the reference base of spring 2020 was so low. Like many economies, the Russian economy struggled with lockdowns and other restrictions on movement a year ago. Seasonally adjusted industrial output in April was unchanged from the previous month. Much of the growth was driven by manufacturing, which was up by 14.2 % y-o-y. Extractive industry output fell by 1.8 % as the OPEC+ agreement on production ceilings continued to constrain Russian crude oil production. Oil output contracted by 5.7 % y-o-y in April. 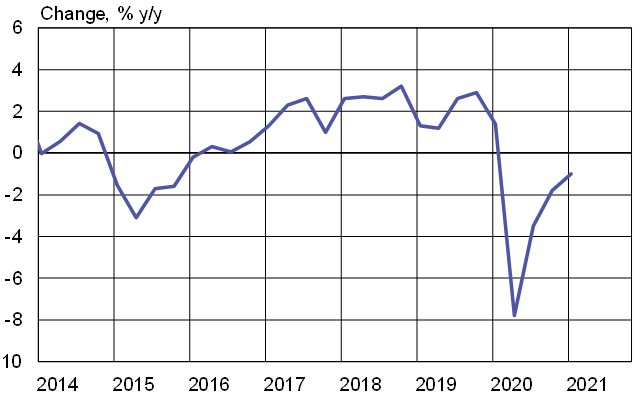