Retail sales, measured in real terms, strengthened from below 5 % y-o-y in October to 6 % in November. It was the third month in a row of rising on-year retail sales, an indicator of consumer goods demand. Some of the support for real growth in retail sales, however, reflects the fact that the consumer prices were declining in November (for more on inflation, see BOFIT Weekly 50/2020).

Industrial output growth has plateaued, as in November the growth was the same 7 % y-o-y pace as in the previous two months. The robust recovery in industrial output has been driven by rising export demand. Thanks especially to soaring de-mand for technology products, export growth accelerated in November to 21 % y-o-y (for more on November foreign trade figures, see BOFIT Weekly 50/2020).

China’s National Bureau of Statistics reports that fixed asset investment (FAI) in the first eleven months of this year was up by 3 % from the same period in 2019. Official time series for investment, however, should be viewed with caution. Revi-sions of the time series and inconsistencies have been ongoing this year. The result from calculating on-year growth in FAI from the official monthly yuan-denominated series now rarely agrees with the official growth figure. In the official growth rate series, FAI was higher this year in the first nine months (January-September) compared to the same period a year earli-er. The corresponding growth rate calculated from the yuan-denominated time series, however, indicates that FAI in Janu-ary-November was still 6 % smaller than in the same period last year. The ending of publication of fixed investment price indices has further complicated the ability of observers to assess the development of fixed investments in real terms. 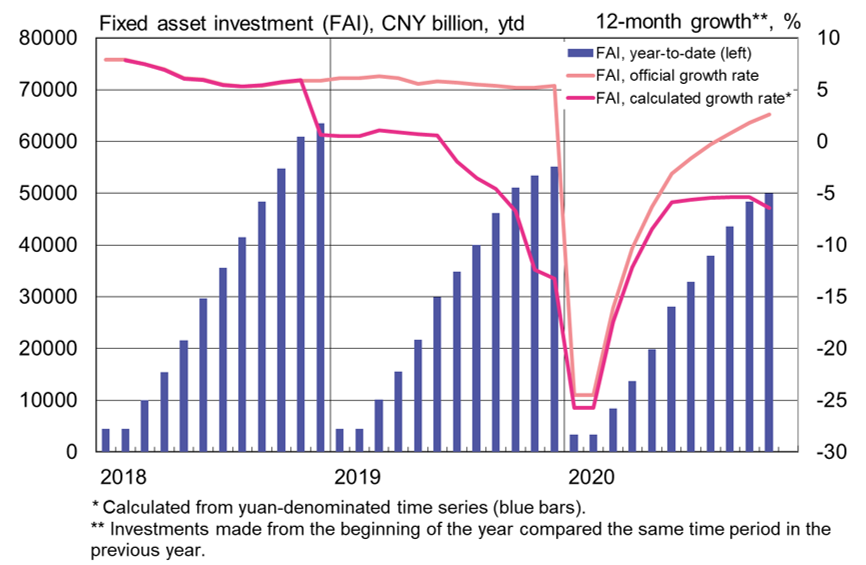