The real disposable incomes of Russian households were down by nearly 5 % in the first quarter of this year compared to the fourth quarter of 2019 (i.e. before the Covid Recession). While the economy has begun to recover, incomes have yet to start rising this year. Because income development had been muted for several years already and consumer prices continue to rise, the real incomes of Russians have regressed to the levels in the early 2010s.

As in many countries, the impacts of the covid crisis have been distributed quite unevenly in Russia. In the hardest-hit branches in Russia, which include hotels and restaurants, jobs have decreased markedly and workers have had to accept pay cuts. Income from entrepreneurial activity has contracted, with the incomes of small-business owners in particular falling sharply. Russia has yet to see a substantial wave of bankruptcies, however, due to a government moratorium on declaring bankruptcy, as well as a range of public-sector subsidy measures. On the other hand, the number of available jobs has increased and wages are rising rapidly in branches such as pharmaceuticals and courier services.

Despite worries about increased poverty from the Covid Recession, preliminary information seems to suggest this was not the case. About 18 million Russians lived below the official 2020 monthly poverty line (11,300 rubles, or about 140 euros), or 12 % of the population. That share is similar to the levels in the early 2010s. The growth of poverty was mitigated last year through covid-crisis support payments, a large share of which went to families with small children and the unemployed. The supports were targeted at poorer households, which meant that Russia’s income disparity narrowed slightly last year. Most of the support payments were one-time payments, however, so their economic impact is expected to be short-lived.

Russia this year is changing the way it officially calculates poverty (subsistence level). Since the late 1990s, a “subsistence minimum” has been based on the cost of purchasing a basket of necessary goods and services. Moving forward, the subsistence level will be defined as 44.2 % of the monthly household median income, which this year is 11,600 rubles (calculated in 2019 earnings). The subsistence level, however, will not be lowered even if the median income declines. While the methodological change is not expected to change Russia’s poverty rate much, it makes it harder for observers to compare poverty levels with previous years. For example, using the poverty line defined by the OECD (50 % of median income), 12.7 % of the Russian population lived in poverty in 2016. Under Russia’s own poverty definition, 13.2 % of the population lived below the poverty line in 2016.

The real incomes of Russians have fallen during the Covid Recession 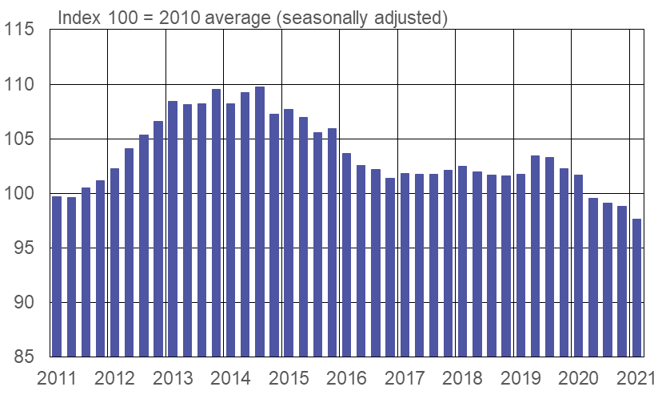