The latest census data released by the National Bureau of Statistics includes information about education levels of various segments of the population. According to the new data, about 220 million Chinese (15 % of the population) had a college or university-level education. This highly educated share of the population increased substantially over the past decade. In 2010, only 9 % of the population had a higher-level degree. During the past decade, China established 380 new institutions of higher learning in response to strong demand. Chinese persons over 15 stayed in school for almost a year longer on average than their counterparts in 2010, when the average time spent on education was about the same as the basic education requirement (9 years).

Illiteracy has declined for decades in China. In 2020, only 2.7 % of the population could not read. In the world’s most populous country, that small percentage still translates to nearly 40 million people. Most illiterate adults in China are elderly. The World Bank reports that nearly all of China’s 15–24 year-olds can read (99.8 %).

According to China’s Ministry of Education, about 30 million students in 2019 were pursuing bachelor’s degrees, nearly 2.5 millions were working on their master’s degrees and 420,000 were doctoral students. Over a third (35 %) of students in 2019 embarking on their master’s studies were studying engineering. The next most popular fields were public and business administration (15 %), medicine (10 %), education (8 %) and natural sciences (7 %). Slightly more students studied law (6 %) than economics (5 %). The least-popular master’s programmes were in history (1 %), philosophy (0.5 %) and military science (0.1 %).

Nearly 500,000 foreign students studied in Chinese universities in 2019. The largest contingent by far consisted of students from South Korea (10 %). Asian students represented well over half of all foreign students in China. About 15 % of students were from Europe (74,000). In contrast, about 1.6 million Chinese studied abroad in 2019, of which nearly a quarter were enrolled in degree programmes in the United States. The next top study destinations were Australia (10 %), the United Kingdom (8 %), Japan (6 %) and Canada (5 %).

Six Chinese universities made the Shanghai ranking list of the world’s top 100 research universities. The same six universities also made the top 100 of the more rounded World University Rankings 2021, which takes into account the quality of teaching, research, knowledge transfer and international outlook. China’s top two universities, Tsinghua University and Peking University, are located in Beijing. China has a total of nearly 2,800 universities or other institutions of higher learning. 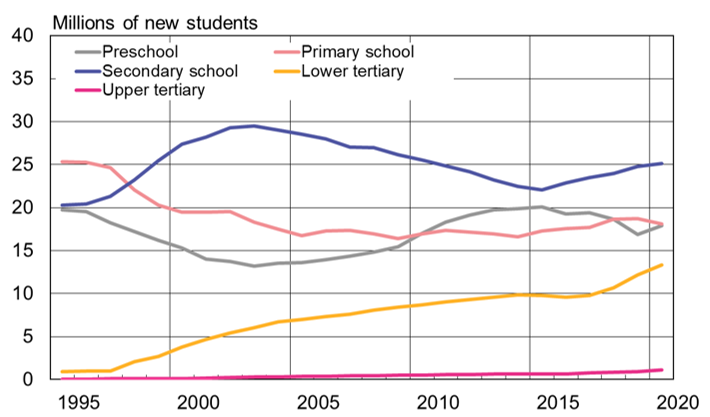