GDP growth slowed last year significantly from 2019, but stayed positive in all but one province. Hubei province, home to the initial Wuhan coronavirus cluster, suffered a massive output drop in the first quarter of 2020. Even if its economy began to recover in late spring and summer, provincial GDP still contracted by 5 % last year.

The largest growth gains in 2020 were posted by provinces and regions in Central and Western China. These administrative areas are generally less developed than the national average. Tibet, which has so far almost completely avoided covid, leads the growth figures. The Tibetan economy is supported by massive public investment (BOFIT Weekly 2020/46). Tibet’s contribution to Chinese GDP, however, is vanishingly small. The powerhouse provinces drove national growth down last year. Regional figures are inconsistent with national GDP accounting, and the figures provinces report are often uncertain and subject to revision. Local officials are rewarded on growth performance, which can create an incentive to exaggerate growth figures.

Official figures show China’s GDP grew by 2 % last year. Although China has not declared an official GDP growth target for 2021, nearly all provinces have done so – in good time ahead of the annual National People’s Congress next month. Many provinces have set cautious growth targets as the covid pandemic continues cause risks for China and the rest of the world. The weighted average of provincial growth targets (6.7 %) is modest given the last year’s exceptionally low growth figures. The OECD, IMF and other forecasts of China’s national GDP growth have generally been higher, around 8 %.

A number of economically largest provinces, including those with highest GDP per capita such as Guangdong, Jiangsu and Shandong, have declared 6 % growth targets. These export-driven industrial provinces weathered the covid crisis quite well and are thus expected to see more moderate recoveries. Shanghai and Beijing cities also have 6 % targets. As in many large cities, the covid epidemic and lockdowns have hurt service business and tourism hardest ­and the prevailing uncertainty continues to cloud the outlook.

The highest GDP growth targets (10 %) have been set for Hubei, which is still recovering from its covid shock, and Hainan Island in the South China Sea. Hainan’s local administration has high hopes for growth fuelled by economic reforms. In January, restrictions on foreign investment were loosened in Hainan. There is also a plan for creating an internationally significant Hainan free trade port.

Regional differences are large in China. For example, the northeastern provinces of Heilongjiang and Jilin have GDP-per-capita numbers that are just over half of the national average and just a quarter of that of the Beijing and Shanghai. Covid has exacerbated regional differences in many ways, including increasing the indebtedness of firms and governments in poor provinces. The remittances of internal migrant workers from big cities and towns to their home districts, which are often an important income source for local economies, dried up last year as many migrant workers found themselves unemployed. 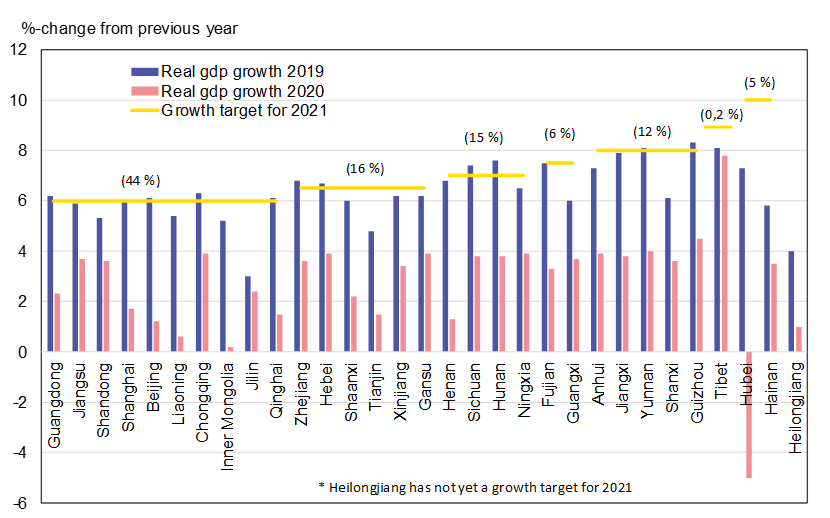