The Chinese Lunar New Year came this year on February 12. In typical years, hundreds of millions of Chinese travel to their home districts to enjoy the week-long national holiday break. Due to local covid outbreaks, however, officials this year required travellers making the holiday journey to produce a fresh negative covid test and observe a two-week quarantine. Media reports indicate some provinces imposed even harsher travel restrictions.

Given the complexities of a holiday getaway, China’s transport ministry reports that passenger numbers for common carriers (buses, planes, ferries, trains, etc.) declined to a quarter of the previous two years in the week preceding the New Year’s holiday week. In 2020, Chinese holiday-makers managed to make it to their home district only to be stranded as new travel restrictions made return impossible. Passenger numbers nosedived after the Lunar New Year in 2020.

Figures published by the commerce ministry show that retail sales and restaurant sales in the holiday week beginning on February 11, 2021, amounted to 820 billion yuan (just under $130 billion). Sales were up by nearly 30 % from last year’s holiday week, but still off by nearly 20 % from 2019, when sales over 1 trillion yuan were recorded. In its press release, however, the commerce ministry confusingly announced sales were up this year by several percent from 2019. Daily customer traffic at shopping centres in China’s ten largest cities was down by 14 % from the 2019 New Year’s holiday week.

China’s official purchasing manager indices (PMIs) showed that economic activity in both service and manufacturing sectors was down from December in January, even if the PMI number was still over the neutral reading of 50. The official services PMI declined from 55.7 in December to 52.4 in January, while the manufacturing PMI went from 51.9 to 51.3. The alternative Markit PMI readings also declined in January. They were down by over four points for the service sector to 52 points, while the manufacturing PMI moderated to 51.5 points.

Last year’s increase in share prices levelled off in early February, with sentiment weakening further after the New Year’s holiday week. The CSI 300 Index, which comprises the 300 largest mainland China companies listed on the Shanghai and Shenzhen exchanges, was down 6 % on Wednesday (Feb. 24) from its pre-holiday level. At the same time, the Shenzhen bourse’s ChiNext index of growth firms was off by nearly 12 %. The yuan’s exchange rate has remained relatively stable since the beginning of January, however. On Thursday (Feb. 25), one US dollar bought 6.46 yuan, and one euro 7.89 yuan.

This Lunar New Year holiday week saw a significant drop in passenger travel by rail, road, air and sea compared to 2019 and 2020 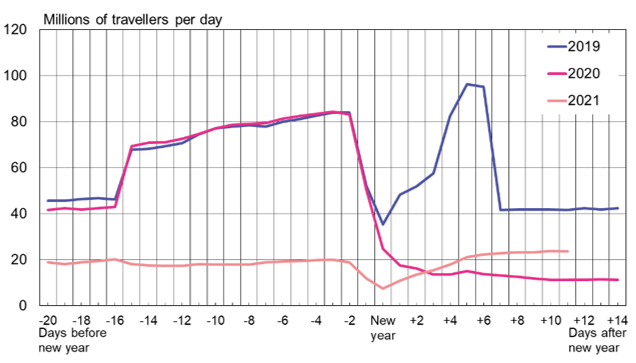