In a trend running counter to the rest of the world, foreign direct investment flows to China increased last year amidst the global pandemic and flaring trade tensions.

Preliminary figures from the United Nations Conference on Trade and Development (UNCTAD) show that global FDI flows fell by 42 % last year. The biggest drops were in FDI flows to developed nations. The flow of FDI to EU countries declined by over 70 % (FDI inflows to Europe were even negative in 2020) and FDI flows to the US halved from 2019 to $134 billion. UNCTAD figures estimate investment flows to China grew by 4 % to $163 billion, making China the world’s top FDI destination. FDI flows to India also increased last year, while investments in Russia almost completely dried up. Global FDI flows are expected to diminish further this year.

Commerce ministry figures show that China’s outward FDI contracted by few percent last year to $133 billion. In the balance-of-payments reporting the outflow of direct investment increased. In contrast, however, figures that track individual Chinese investments abroad show a considerable drop last year. The China Global Investment Tracker database, which is maintained by the American Enterprise Institute and the Heritage Foundation, seeks to record all foreign direct investments in excess of $100 million made by Chinese companies. The data show that such investments fell by 66 % to only $31 billion last year.

Despite rising investment flows, China’s total FDI stock is relatively small compared to the size of its economy. In 2019, less than 5 % of the global FDI stock was in China and China’s share of global outward FDI was 6 %. 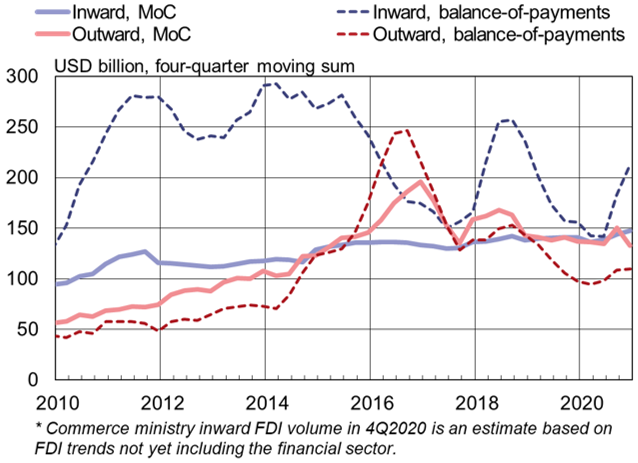