The 21 % contraction in the value of Russian goods exports last year largely reflected the collapse in demand for energy commodities and plummeting oil prices due to the covid-19 pandemic. Crude oil export volumes declined by 13 % last year, while natural gas volumes were down by about 8 %. The total export volume of refined oil products, however, fell by only roughly 1 % as the export volumes of gasoline and diesel fuels increased. Oil & gas accounted for about half of Russian goods exports.

Russian exports got a boost from precious metals and agricultural products, with the share of both category rising to about 10 % of Russian goods exports. Led by gold, the value of precious metal exports doubled. The value of food exports grew by 20 %, driven by robust growth in exports of grains and vegetable oils. Export volumes of wheat rose last year to all-time record level. Russia has even risen as the world’s largest wheat exporter. The growth in food exports, however, also caused food prices to increase in Russia, especially late in the year. To subdue the price spike, Russia has imposed export quotas and export duties on certain agricultural exports.

Despite the massive reduction in demand caused by covid and ruble depreciation, the value of Russian goods imports shrank by only 5 % last year. Among the largest import product categories, chemical products saw the deepest decline with a 12 % reduction in import value. The value of pharmaceutical imports fell even by 30 %. In contrast, the value of food imports contracted by just 1 % and that of machinery, equipment & vehicles by 2 %. Import of machinery & equipment recovered especially at the end of last year. The value of electrical equipment imports even increased slightly in full year terms. The import volumes of several food items were also up last year. 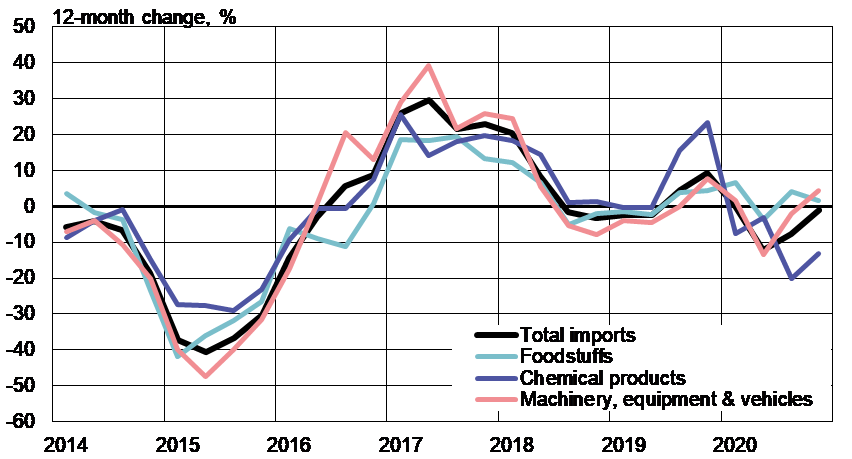