Preliminary balance-of-payments figures show that China’s 2020 current account surplus was about $300 billion, which corresponds to roughly 2 % of GDP. The 2019 current account surplus was $140 billion, or about 1 % of GDP. The increase in last year’s surplus reflects both a larger goods trade surplus and a reduction in the services trade deficit.

Driven by strong exports, which grew significantly faster than imports in the second half of 2020, the goods trade surplus rose to $535 billion, a 25 % increase from 2019. The services trade deficit contracted to $145 billion, or about half of recent years. A massive drop in Chinese tourism abroad was the biggest factor in reducing the services trade deficit as it caused services import numbers to plunge.

Even with solid growth in the current account surplus, China’s foreign currency reserves increased by just $28 billion. Significantly more capital was transferred abroad than in 2019. Detailed financial account figures will be released later, when also the current account figures are revised. Taking into account valuation changes, the value of China’s foreign currency reserves at the end of December 2020 reached nearly $3.4 trillion (includes gold, SDRs and IMF allocated reserves). China’s forex reserves have remained relatively stable over the past four years. 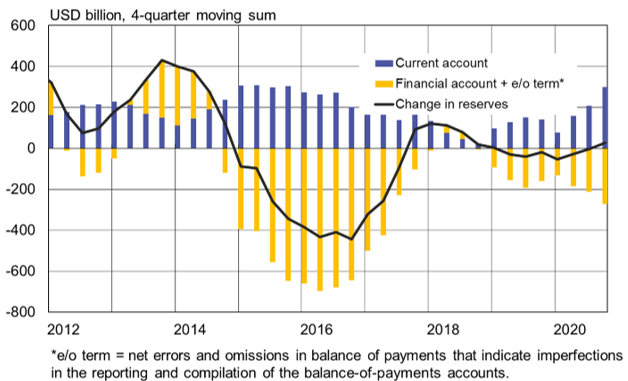