Following a decline last spring, fixed investment was down by about 5 % y-o-y in real terms in both the second and third quarters. It recovered in the fourth quarter, rising by over 1 % y‑o‑y. As fixed investment recovered and last year’s second-quarter drop was more modest upon revision, the overall dip last year amounted to only about one-and-a-half percent. This is a significantly smaller fall than shown in the fixed capital formation number of -6 % as included in GDP accounting. The difference is due to statistical differences in calculation of the two indicators (e.g. coverage of datasets).

At this stage, Rosstat’s annual data on the structure of fixed investment only covers the large and mid-sized firms and the government sector. These together account for about three-quarters of total fixed investment. The overall number for their decline was significantly affected by the reduction in investment in pipeline transmission of the oil & gas industry, which was down by a third last year after already having fallen sharply in 2019. On the other hand, investment in production of oil & gas increased by 2 %, having already experienced strong growth in 2019. Investment in oil-&-gas-production-related services continued to decline. Investment in oil refining, which took off fast in 2019, rose at a 14 % y-o-y pace last year. 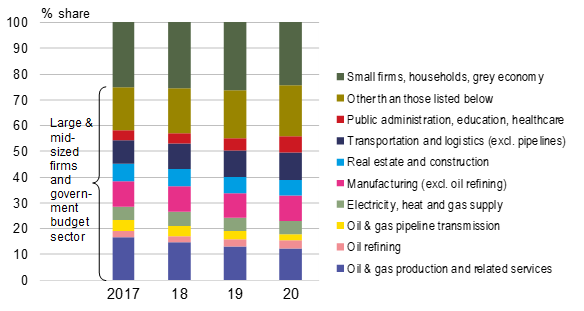