China suffered most from the first wave of the covid-19 pandemic in the first quarter, when GDP contracted in nearly every province in mainland China. About a third of China’s provinces, (including autonomous regions and directly-administered municipalities) continued to experience on-year contractions in GDP in the second quarter. A distinct turn for the better occurred in the third quarter, when GDP rose in all parts of mainland China (and quite strong growth in a number of provinces). Some of the growth burst can be attributed to the government’s stimulus efforts.

Hubei province, which is situated in the Central China, remains worst-affected by the covid crisis. About 80 % of all confirmed covid cases in China have been registered in the province. The provincial capital, Wuhan, was in strict lockdown for 2½ months. Nearly all of the rest of Hubei was locked down for about two months starting from January 23. Hubei province’s real GDP contracted by over 37 % y-o-y in the first quarter. Despite stimulus, Hubei’s real GDP for January-September was still down by 10 % y-o-y. The other provinces of Central China, in contrast, managed to get through the first wave of covid-19 in remarkably good shape. Central China’s (excl. Hubei) GDP growth in the second quarter was 4 %, which was better than most of the country.

GDP contracted sharply in all three provinces of Northeast China due to covid-19. In April, Heilongjiang province was forced to further tighten its lockdown measures when the rate of new covid infections spiked. The impact of the hard lockdown was reflected in provincial GDP, which contracted by 6 % y-o-y in the second quarter, the biggest decline in output for any province in China.

The smallest declines in GDP were registered in Western China, where the number of confirmed covid cases per capita remained lower than anywhere else in the country. For example, official figures indicate that Tibet has so far been almost completely spared of coronavirus infections. GDP growth in Tibet has been strong for years, and the impacts of covid have done little to curb that growth. Growth in the Xinjiang province was strong in the first quarter despite the coronavirus epidemic.

In the wealthy provinces of China’s East Coast, GDP declined by about 5 % y-o-y in the first quarter, and recovered in the second quarter by about 3 %. Growth was even stronger in the third quarter. Tourism and other services branches suffered most in China’s large cities. The East Coast, which is rich in export-related industries, saw its collapse in output in the first quarter of this year followed by a brisk recovery.

Over the short term, China’s GDP growth figures conceal huge trend differences across provinces. In the wealthy self-governing megalopolises of Beijing and Shanghai, total output per capita is five times higher than in the poorest provinces. The covid crisis is expected to exacerbate regional economic differences as well as tensions between people living in cities and rural citizens. 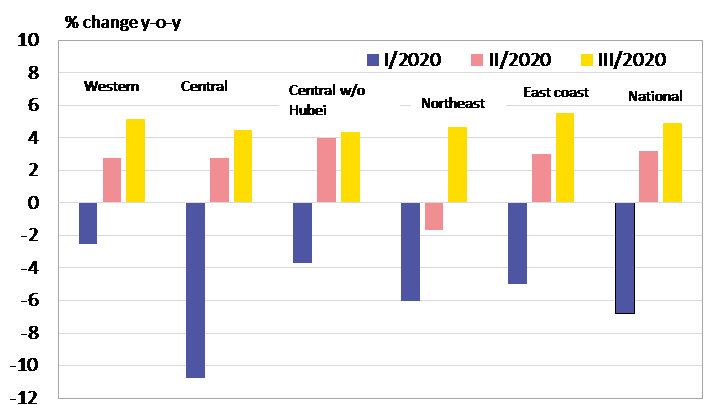