While Hong Kong has weathered the covid-19 pandemic with relatively few infections, residents have had to deal with severe restrictions on movement and the economic consequences. Hong Kong’s economy started to shrink already in summer 2019. The downturn continued all last year, reducing the GDP of the region by 6 % y-o-y. Even if the economy recovered slightly in the second half of 2020, its GDP still contracted by 3 % y-o-y in the fourth quarter. It appears that the recovery stalled in the fourth quarter as the volume of GDP remained unchanged from the previous quarter. The Hong Kong government has dealt with the latest epidemic wave by imposing local quarantines and restrictions on outdoor movement, which has also impacted economic trends.

Private consumption, which is important to Hong Kong’s economy, fell by 10 % last year. In the fourth quarter, GDP still contracted by almost 8 % y-o-y. The volume of retail sales in 2020 was down by over 25 % y-o-y. Restaurants and hotels, as well as tourism-related services, have been the hardest hit branches in the service sector. These branches have experienced dramatic increases in unemployment. Above all, the drop in Chinese tourists can be seen in the numbers of Chinese visiting Hong Kong. There are strict travel rules between the mainland and the SAR, even if the covid situation is relatively good in both Hong Kong and mainland China.

There was a large disparity in foreign trade of goods and services last year. Thanks to the rapid recovery of China’s economy, the value of Hong Kong’s goods exports approached the previous year’s level. In the fourth quarter of 2020, goods exports already grew by nearly 6 % y-o-y. In contrast, services exports contracted by nearly 37 % y-o-y, mainly due to the collapse in tourism.

Hong Kong’s large financial sector has managed better in exceptional circumstances than firms in the real economy. Indeed, the Hong Kong stock exchange was one of the world’s best-performing stock exchanges last year. The strong performance was supported by capital flows from mainland China (BOFIT Weekly 2/2021). The role of Chinese investors has growth significantly as they have invested via Hong Kong stock connect, especially in firms in the technology sector.

Mainland China’s tightening grip on Hong Kong and the political ramifications of that cloud the economic outlook for Hong Kong. The security law that entered into force last summer has led to increased arrests of activists and protesters. The UK has offered Hongkongers residence permits and the possibility to apply for British citizenship after six years of residency. The offer extends to all persons who have resided in Hong Kong since 1997, when the area was still part of the British Commonwealth. Other countries such as Australia and Canada have also relaxed their rules in immigration of Hong Kong citizens. By some estimates, as many as a million Hongkongers could move abroad. As a small open economy, Hong Kong’s economic prospects depend also on trends in the global economy, and the Chinese economy in particular. 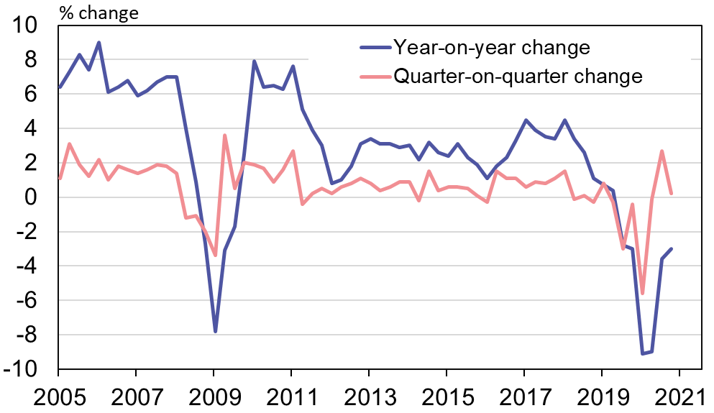