Since the start of the year, the regulators have started to restrain the possibilities for banks to grant loans to the real estate sector. Last year, officials imposed restrictions on large property developers’ borrowing. Regulators fear that the rapid increase in developers’ indebtedness could create a price bubble in the housing market and increase financial market risks. The payment problems of Chinese developers have been in the headlines for several years and their payment defaults have increased. Concerns have focused especially on Evergrande Group, the world’s most-indebted property developer ($110 billion in debt obligations at the end of 2020). Officials hope that redirection of bank lending away from debt-mired real estate developers to other sectors will also improve resource allocation in the economy.

New guidelines issued by the central bank and China Banking and Insurance Regulatory Commission (CBIRC) entered into force on January 1. The new rules establish ceilings on both the property loans and mortgages issued by banks. The caps on lending shares depend on the bank’s size and status. China’s large banks are permitted a higher property-related lending share (40 % of their loan stock can go to loans in the real estate sector and 32.5 % to mortgage loans). In contrast, small village banks are subject to more restricted lending (just 12.5 % to the real estate sector and 7.5 % to mortgages). A transition period of unknown length has been granted to banks to reach the set ratios. In addition, regulations can be tightened or relaxed depending on the economic situation in the region.

The analytics firm Gavekal Research reports that in September 2020, the aggregate level of both mortgages (20 % share of bank lending) and property loans (29 % share) in the banking sector were well below the implicit upper limits weighted by bank size (28 % and 34 %). Many individual banks, however, exceed their maximum limits. The regulators have already tried earlier to get the indebtedness of property developers under control. In 2019, the government asked banks to review their lending to the real estate sector, limit bond issues of certain developers and banned trust companies from granting any new loans to developers.

Last August, the central bank and the housing ministry launched a pilot programme designed to reduce the financial market risks confronting property developers. While the regulations have yet to be published, media reports indicate that they target three “red line” ratios: the debt-to-equity ratio (must be below 100 %), debt-to-assets ratio (under 70 %) and ratio of short-term debt to cash on hand (cannot exceed 1). Only firms that do not cross all these lines will be allowed to take on more debt. The firms can increase their debt levels between 5–15 % a year depending on how many of the three conditions they meet. The pilot programme includes at least a dozen of China’s largest developers (including Evergrande, which crosses all three red lines). In the last meeting with regulatory officials in January, a total of 20 developers were invited. The plan is to expand the pilot experiment to include all property firms at some point. Bloomberg reports that some developers have already figured out how to circumvent the new rules by increasing their off-balance-sheet borrowing as it is not included in the ratio calculations.

The new regulations are expected to slightly slow growth in housing loans and rein in growth in the real estate market. Measured by floor space, real estate sales last year increased by 3 % amidst the covid epidemic. The real estate sector and construction activity account directly for 14 % of China’s GDP. When the indirect impacts are included, construction activity is estimated to generate up to 30 % of GDP. Majority of investment assets held by Chinese households is in the form of property. At the end of 2020, 69 % of the household borrowing was housing loans. Relative to income levels, housing prices in China’s large cities are the highest in the world.

While real estate sales increased last year, the acquisition of land-use rights and construction starts were slightly down 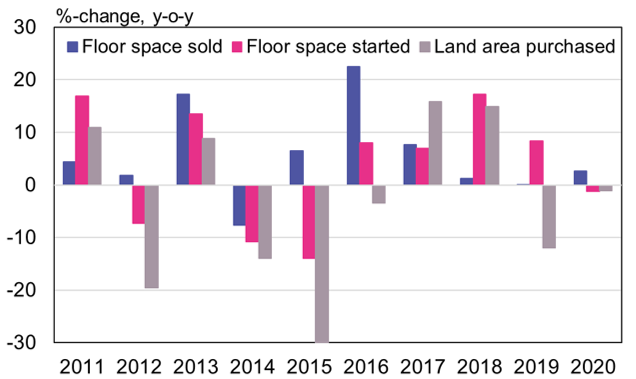