China recovered rapidly from the decline in share prices that followed the outbreak of the coronavirus crisis at the start of 2020. Share prices had their first steep rise during last summer, and another steady climb at year-end. That rise has continued in the first two weeks of 2021. On Wednesday (Jan. 13), the Shanghai composite index was up 18 % y-o-y, and the Shenzhen composite index up 39 % y-o-y. The biggest gains were posted by the Shenzhen stock exchange’s ChiNext index of growth firms, which was up 70 % y-o-y.

The rise in share prices last summer was fuelled by China’s domestic media, which have encouraged people to invest in equities. Just as during the 2015 share price bubble, a large amount of shares were purchased on margin (BOFIT Weekly 28/2020). Share prices have generally been supported by the rapid economic recovery, increased money supply, faster adoption of coronavirus vaccines and stimulus measures in China and elsewhere in the world. With the stunning rise in share prices, some Chinese stock market indices such as the CSI 300 have broken above their record levels in 2015.

In recent days, capital has flowed from mainland China to the Hong Kong bourse via the Stock Connect programme. After US investors were banned from owning or trading shares in certain Chinese firms after Monday (Jan. 11), Chinese investors jumped into the market to purchase billions of dollars of shares in the banned firms (BOFIT Weekly 50/2020). The Hong Kong stock exchange’s Hang Seng index has risen by nearly 5 % in the first two weeks of 2021. Much of the investment was directed at shares of the telecom giants China Mobile, China Unicom and China Telecom, which the US sees as having connections to the Chinese military and thereby poses a national security threat to the US. The banned firms have already been dropped from several international stock indices (MSCI, FTSE Russell and S&P Dow Jones) and after some wobbling the New York stock exchange. Foreign investment assets have flowed into mainland China’s markets via the Stock Connect trading programmes since November. Earlier last autumn, China still had a net outflow of capital. 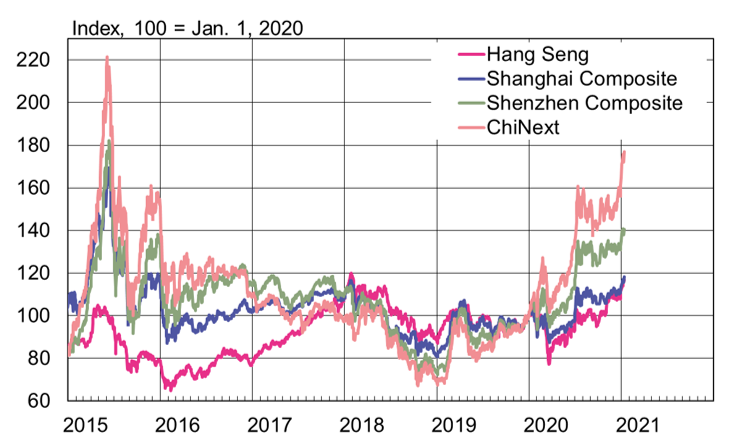