In late December, Chinese officials banned the import of Australian coal, leaving dozens of freighters offshore waiting to offload their cargoes due to the uncertain situation. The Chinese have yet to comment officially on the dispute over coal imports, which Australian prime minister Scott Morrison considers unfortunate for both countries.

China-Australia political and trade relations began to decline sharply after Australia (among many countries) last May supported an investigation into the origins of the covid-19 epidemic by an international team of forensic scientists. The Chinese were also particularly irked by Australia’s decisions to ban Huawei’s participation in 5G projects, impose restrictions on direct investment from China and criticize the human rights situation in China.

Australia is also an active member in the informal Quadrilateral Security Dialogue (Quad Alliance), which also includes India, Japan and the United States. The Quad Alliance is seen unofficially as Asia’s NATO, operating as a counterforce to China in its surroundings. The group last November organised joint naval exercises in the Indian Ocean.

China’s response has been hard for the Australians to stomach as China is its largest export market, accounting for nearly 40 % of all Australian goods exports in 2019. Although Australia only accounts for roughly 6 % of China’s goods trade, it provides over half of China’s critical iron ore imports, which are difficult to replace from alternative sources. The trade dispute is a two-edged sword. It highlights China’s power, but also serves as a warning to others against getting excessively dependent on China as a trading partner. 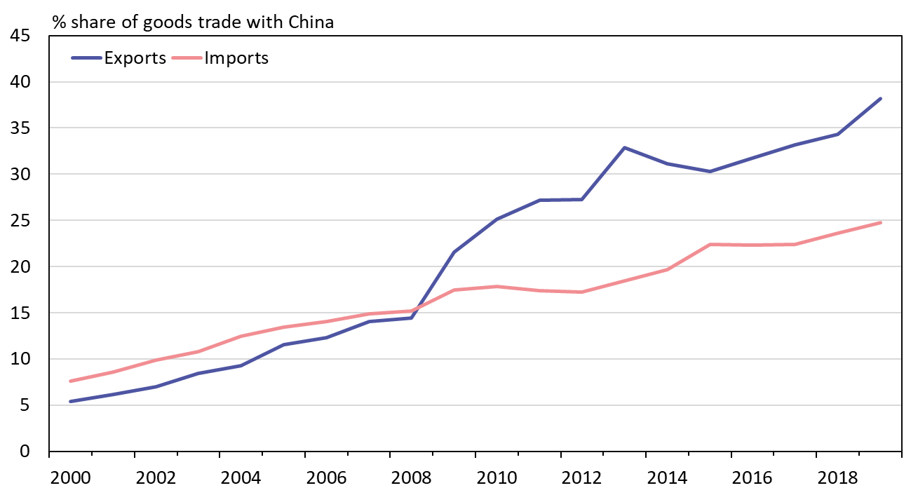