After roughly seven years of talks, China and the EU said late last month that they are nearing completion of a comprehensive agreement on investments (CAI). Finishing the agreement was important for Germany, which hoped to reach it before its six-month term in the EU’s rotating presidency ended in December. The agreement should make life easier for investors in both the EU and China, as well as assure fair treatment of firms and increase transparency about state subsidies. China also promised to ease its joint-venture requirements in many branches, which should improve opportunities of European firms operating in China. The CAI will replace existing bilateral agreements between China and individual EU states.

Although a common understanding has been reached, the agreement still requires formulation of the final details. The agreement language must be reviewed, finalised and translated before it goes to an EU summit and the EU parliament for ratification. These steps require a minimum of several months. Some of the issues have been postponed, e.g. dispute resolution processes.

Straightforward ratification within the EU is not self-evident. The negotiation process has been criticised for its lack of transparency. Not all member countries are fully clued in or aware of the negotiation details, and many see the CAI as favouring large EU countries such as Germany and France. In addition, the EU has been criticised for wanting to increase cooperation with China without addressing such issues as the country’s human rights violations. Prominent coverage has gone to forced labour (re-education) camps for Uighurs in the Xinjiang province. China has committed to uphold better its International Labour Organization (ILO) commitments on treatment of workers and agreed to make “continuous and sustained efforts” to ratify ILO convention that bans the use of forced labour, but no timetables have been set. The CAI framework includes a special working group on labour issues and other sustainable development matters that arise with the implementation of the CAI.

EU countries are also doubtful about how China’s other promises will be fulfilled. The European Commission reports that it will establish several oversight mechanisms, including various working groups and regular high-level meetings. The Commission also said that the CAI will include an ad hoc mechanism for rapid response in specific instances. China and the EU will establish a regular dialogue and practical measures such as ways for firms and organisations to participate in the implementation process.

The new investment agreement is seen as most beneficial to industry, which, according to the European Commission, accounts for over half of EU investment in China (the largest investors are the car industry and companies in the basic materials sector). China commits to easing investment in many service branches including cloud services, financial services, private healthcare, environmental services, as well as international shipping and air freight. For China, the agreement gives improved possibilities, especially with regard to increased investment in environmental technology and renewable energy in Europe. The agreement is mostly a strategic achievement as Chinese investors can already invest freely in Europe.

Germany has long been Europe’s leading direct investor in China 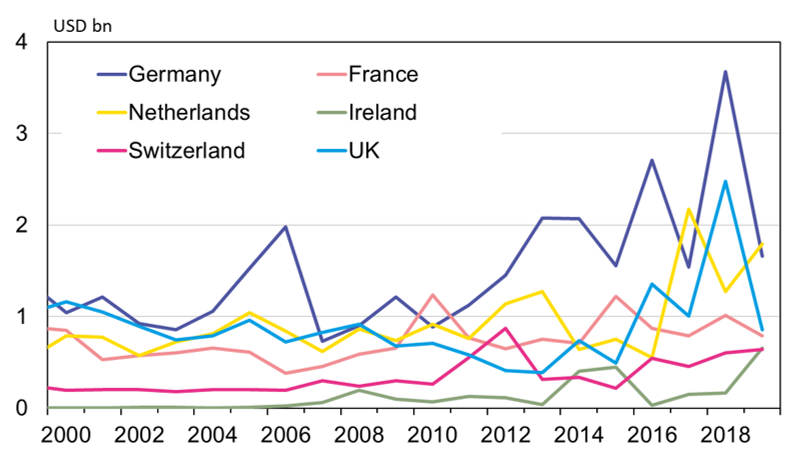