Preliminary figures released by the Central Bank of Russia show revenues from exports of goods and services recovered slightly in the fourth quarter of 2020, but were still nearly 25 % below a year earlier. Earnings from exports of oil, petroleum products and natural gas were down by over 40 % y-o-y, mainly due to last year’s slump in prices of these key export commodities. In contrast, exports of other goods posted more positive earnings for the entire second half by roughly matching those of second half of 2019. Revenues from exports of services were still off by more than 35 % y-o-y because of a very drastic loss of travel earnings.

Russian spending on imports of goods and services recovered slightly further in the fourth quarter. Spending was still about 15 % lower than a year earlier. The situation appears relatively promising with respect to goods imports as spending on imports was only off by a few percent from a year earlier (due to a shift in the euro-dollar rate, the on-year change in goods imports was -10 % in euro terms but just -2 % in dollars). While services imports also took a slight turn for the better, import spending was still down by about 40 % y-o-y. Again, much of this reflects the collapse in Russian travel abroad.

As the drop in import spending was slightly less than the contraction in export revenues, Russia’s goods trade balance has been significantly smaller than usual for nearly a year. Nevertheless, Russian spending while on travel abroad and sharp contractions in the amounts of dividends and interest paid by Russian firms out from the country, kept Russia’s current account in surplus even if the surplus headed down towards 2 % of GDP.

The financial balance between Russia and the rest of the world showed a notably larger deficit last year than in most previous years. Part of this was due to the fact that the government bond market attracted relatively small amounts of foreign investment because, among other things, the government has managed to finance an overwhelming chunk of the growing fiscal deficit through domestic borrowing. The net outflow of capital abroad from the private sector increased to nearly 3.5 % of GDP, one of the largest figures seen in several years. The net capital outflow from the banking sector was rather moderate. 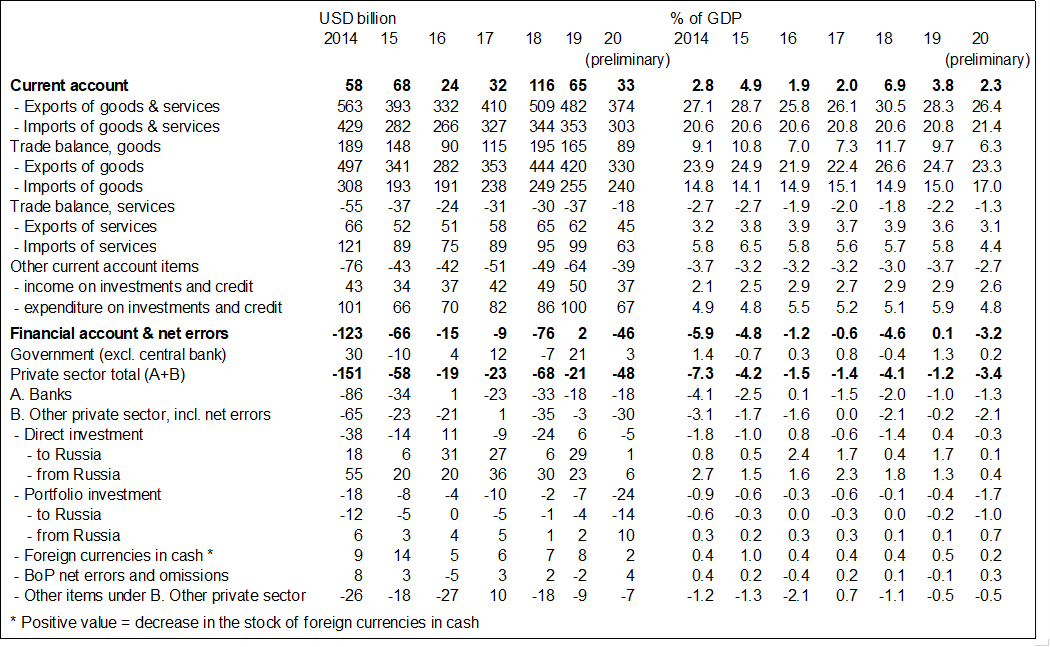