The IPO of the Ant Group, Alibaba’s payment services subsidiary, was set for simultaneous listings this month on the Shanghai stock exchange’s Star Market list and the Hong Kong stock exchange. The $36 billion IPO would have been the largest ever, pushing the market capitalisation of the Ant Group north of $300 billion, even higher than that of state-owned ICBC, the world’s largest bank in terms of total assets. The Shanghai exchange, however, called off the IPO two days before its scheduled date. Listing plans were cancelled on the Hong Kong exchange as well. Alibaba, Ant Group’s parent, listed on the New York Stock Exchange in 2014 that was the world’s largest IPO at the time. A year ago, Alibaba also listed its shares on the Hong Kong exchange.

On November 3, China issued a draft of stricter rules for online microlenders. It is not yet known when the new rules will be finalised or implemented. The reforms seek to limit the size of individual loans, place limits on microlender’s indebtedness and define that online platforms would need to fund a significantly larger share of loans instead of relying on partner banks for financing. On the same day, Ant Group representatives were summoned to meet with regulators. The Shanghai stock exchange (SSE) said the reason for suspending the IPO had to do with the interview with regulators and change in the regulatory environment. Officials said the SSE’s decision was necessary to protect investors and financial market stability. Observers think that the cancellation may have had other reasons as well. Ant Group and other fintech firms have emerged as serious challengers to traditional state-owned banks in that they can offer payment and financing services while being more loosely regulated than banks. The last-minute cancellation of the IPO, which had earlier been green-lighted by officials, is unlikely to improve investor views on the predictability of Chinese financial markets or regulatory transparency.

Despite to scrubbing of the Ant Group IPO, listings on mainland China bourses continue to rise. Consulting and accounting firm EY reports that there were 295 IPO listings on the Shanghai and Shenzhen exchanges during the January-September period. The listings represent about third of all IPOs globally during the period and correspond to over 30 % of the total value of new IPOs. Over the same time, the Hong Kong stock exchange witnessed 99 IPOs (17 % of the value of all IPOs globally). US exchanges (NYSE and NASDAQ) saw 150 IPOs (34 % of the value of global IPOs).

Since Shanghai’s Science and Technology Innovation Board (Star Market) was launched last year, a significant number of listings have been added to the list. The Star Market encourages China’s biggest tech innovators to list domestically (BOFIT Weekly 30/2019). The Star Market list presently includes over 190 firms. The Shenzhen stock exchange has its own list of growth firms, the ChiNext list, which contains over 870 firms. Listing practices on ChiNext were eased this year to conform with Star Market rules. China is aiming to extend the registration-based IPO reform to all listings in both exchanges. One motivation for the reform is to accommodate home listings of US-listed Chinese companies in the event they are forced to leave the US market.

Value of IPOs on mainland China exchanges with Star Market and ChiNext listings specified, annually and in January-October 2020 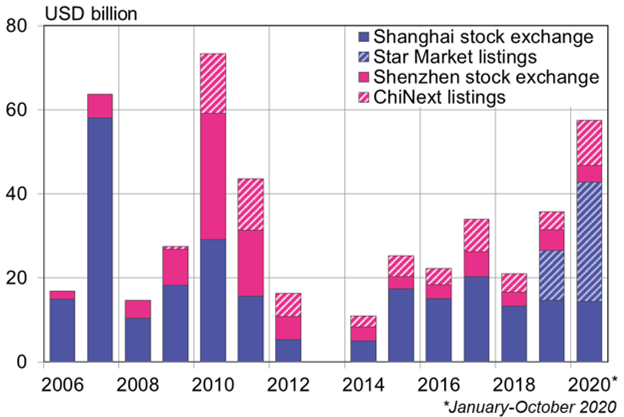