The Shanghai Stock Exchange rolled out its new Star Market on Monday (Jul. 22). The new board enables technology and science companies to list on the exchange with less strict requirements on e.g. firm profitability than the main boards at the Shanghai and Shenzhen exchanges. Star Market listing also does not require government approval, making listing faster and easier. Market makers price the firm and the Shanghai exchange approves each listing.

Trading launched with 25 firms on the list and over 100 firms are on the waiting list. Restrictions on trading and limits on daily price swings are more relaxed than for other markets in mainland China. For example, short-selling of shares on the new board is permitted, where in the main boards it is usually restricted. However, only investors with e.g. a trading history of at least two years and over 500,000 yuan (65,000 euros) in investment capital may trade on the Star Market. The requirement is designed to diminish the number of naïve speculators in the market. Despite this, Star Market shares were up on average 140 % on the first day of trading. IPOs were wildly oversubscribed. Only officially qualified foreign institutional investors (QFIIs) can trade in Star Market listings.

In particular, China would like to attract its own tech giants to the new list as many of them currently list offshore. The Star Market also allows Chinese firms listed abroad to raise capital by issuing Chinese Depository Receipts (CDRs). Investor interest in the new market has yet to be established. Response to the Shenzhen exchange’s ChiNext tech board, which launched in 2009, has been underwhelming.

The new list’s market value climbed to 529 billion yuan (77 billion dollars) in its first day of trading, and was 537 billion yuan on Thursday (Jul. 25). The Shanghai exchange will release an index tracking the Star Market price developments later. The key exchange indexes were relatively stable despite the release of a new market. Prices on mainland China stock markets have been fairly stable since May. 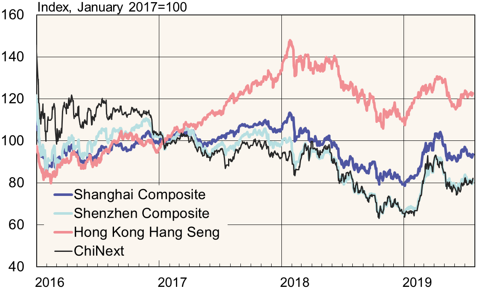