Russia experienced an 8.0 % y-o-y drop in GDP in the second quarter as its economy struggled with the covid-19 pandemic and lockdowns. Even so, Russia’s economy is less hard-hit by coronavirus than most European countries. GDP in the euro area witnessed a nearly 15 % y-o-y contraction in the second quarter, but only a 4.4 % drop in the third quarter. GDP in the United Kingdom shrank by nearly 22 % in the second quarter. The structure of Russia’s economy has provided hidden benefits in dealing with covid shocks. For example, the contribution of services (particularly tourism) to overall output and employment is smaller in Russia than in many other countries.

The third-quarter output contractions were less severe in all branches than in the previous quarter. Manufacturing contracted by just 0.4 % y-o-y, while wholesale activity actually grew by 1.1 %. Services contracted by nearly 20 % y-o-y, a substantial improvement over the 36 % drop of the second quarter.

However, while industrial output declined by less than 4 % y-o-y in September, it fell by 6 % in October. The level of industrial output (seasonally adjusted) matched the September number after increasing for four consecutive months, and the level is now only about 6 % below its pre-covid level of late 2019.

Manufacturing output, a component of industrial output, was down by 6 % y-o-y in October. In September, the decline was less than 4 %. For example, the bump in the pharmaceuticals and medical supplies seems to be over. Output of mineral extractive industries was down by nearly 9 % y-o-y, which was largely a reflection of Russia’s adherence to oil production ceilings under its OPEC+ agreement. The current rise in confirmed covid-19 cases is likely to hurt Russia’s economic performance in the months ahead. 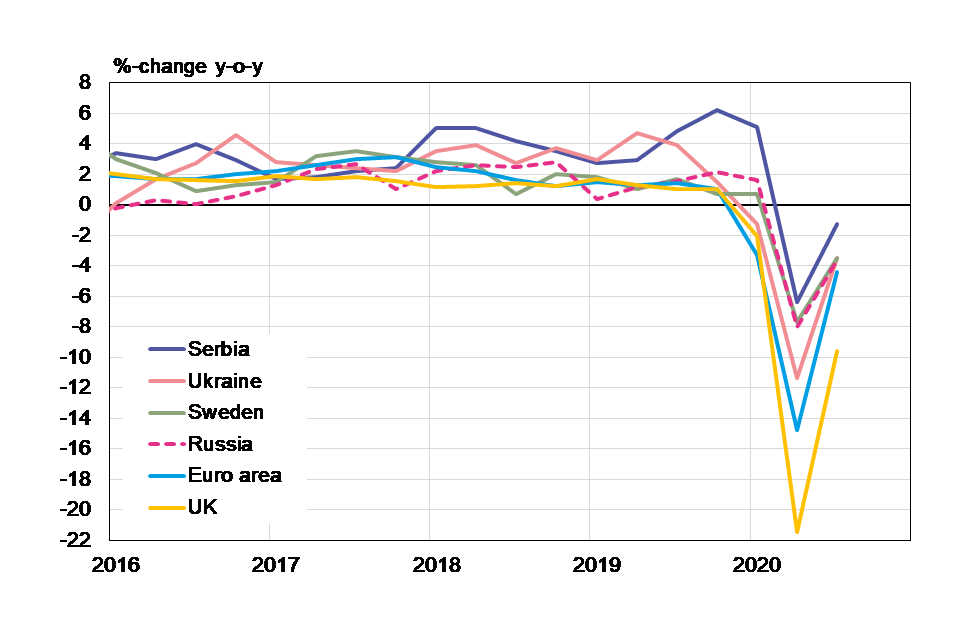