The long-prevailing modest state of economic relations between Russia and the United States has been further clouded in recent years by political tensions, economic sanctions and increased competition on international energy markets. The US is a considerably more important economic partner for Russia than vice versa. While Russia has sought to reduce its reliance on the US dollar in recent years, the dollar remains important for Russian transactions.

Russia-US goods trade last year was worth about 30 billion dollars. In recent years, the US has accounted for approximately 4 % of Russia’s goods trade, while Russia has represented only about 0.7 % of US goods trade. Russia mainly exports oil, petroleum products, metals and fertilizers to the US. It mainly imports US machinery & equipment, as well as pharmaceuticals. The value of US-Russia bilateral goods trade this year has contracted by about 10 %. The UN Conference on Trade and Development (UNCTAD) has evaluated that the US is the single largest provider of foreign direct investment to Russia once third-country pass-throughs are taken into account.

Russia-US economic relations have been clouded by various economic sanctions imposed on Russia in response to e.g. the annexation of Crimea and Russian interference in US elections and the threat of further sanctions has increased uncertainty on the economic relations. Sectoral sanctions include banning arms sales, limiting exports to Russia of technologies critical to oil exploration and production, as well as restrictions on the access of certain Russian firms and the Russian state to international financing. Other economic sanctions focus on specific individuals or firms. Russia has banned imports of several foodstuffs from the US as part of its countersanctions.

US-Russian competition in global energy markets has intensified in recent years as the US has ramped up production of shale oil and liquefied natural gas (LNG). The US has seen its oil and LNG exports soar in recent years to around a 10 % of total global exports. The abundance of US supplies has depressed global crude oil prices and pushed Russia to production ceiling agreement with OPEC. American LNG also constitutes a potential competitor for Russia’s pipeline gas to Europe.

In recent years, Russia has sought to reduce its dependence on the US dollar. While the dollar’s share in Russian debt, assets and trade has contracted, it is still significant. The use of the dollar in Russian foreign trade and foreign debt has diminished in recent years from well over 60 % to about 50 %. The share of dollar-denominated assets in Russia’s foreign reserves has decreased from 45 % to around 30 %. As recently as 2017, Russia was still among the largest holders of US sovereign debt. Today, Russia holds less US sovereign debt than Egypt or Peru. The heightened tensions with western countries have also increased Russia's aspirations for tighter economic relations with China. 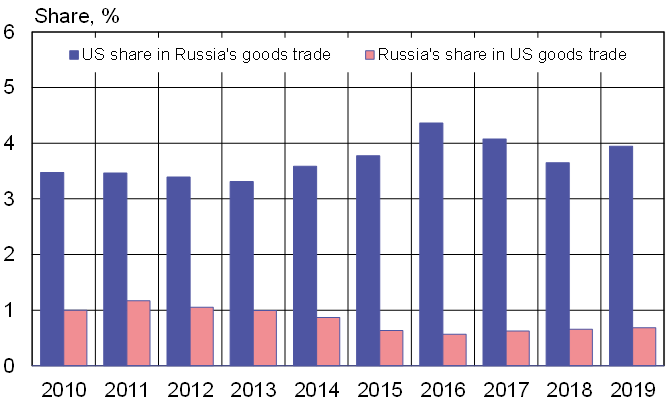