The results of the national election in the United States last week are unlikely to affect the current disputes with China. Neither country has budged on the central issues, which centre around China’s use of government subsidies, industrial policy and cybersecurity. In addition, both the Democratic and Republican parties in the US strongly support actions taken against China.

US-China bilateral trade has suffered for more than two years. As of end-2019, the US accounted for 15 % of China’s imports, while China represented 6 % of US imports. In 2017, before the imposition of punitive tariffs, the US provided more than 20 % of China’s imports and China accounted for 10 % of US imports. The signing of phase one of the trade agreement in January 2020 has done little to assuage the situation. Many of the targets in the agreement will not come close to being achieved this year, even if China’s imports from the US in recent months have grown swiftly. China’s imports from the US rose by 22 % y-o-y in October, while the country’s imports overall increased by 11 %. At the same time, exports to the US (up 33 %) performed much better than Chinese exports overall (up 5 %).

The value of goods imports from the US covered under phase one of the US-China bilateral trade agreement amounted to $65 billion for the first nine months of this year. The 2020 target is more than $170 billion. Some goods import activity this year has suffered from production interruptions caused by covid-19 pandemic as well as shifts in demand. In addition, the sharp drop in oil prices in early March made it particularly difficult to reach import targets in the energy sector as the agreed targets are specified in dollars.

In addition to tariffs on goods, the US has taken a hard line on China’s technology sector in recent years. Among other things, the US has restricted sales of US technology and components to China’s tech giants on the basis of national security. The US has also sought to prevent the use of Chinese software in the US. Besides the technology dispute, relations have been strained by the US shuttering of China’s Houston consulate, the imposition of sanctions on officials in mainland China and Hong Kong, as well as the ending of Hong Kong’s special status.

Even when Joe Biden assumes the presidency in late January, the tensions between China and the US will continue. US China policy next year is nevertheless likely to become less capricious and more predictable. The incoming administration is more open to multilateral cooperation and traditional diplomacy. In particular, the US could coordinate its China policy with other western countries in order to actually compel China to change behaviour. Stronger commitment to rule-based cooperation, opening up of markets and a fair treatment of foreign firms would be the first steps towards easing trade disputes.

Chinese goods trade with the US 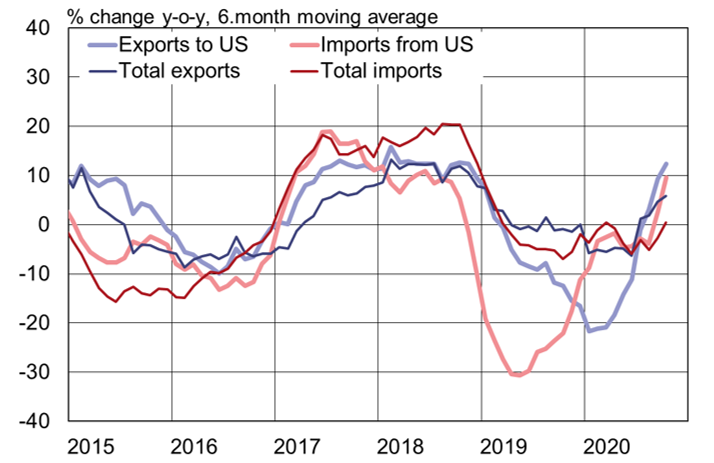