The People’s Bank of China reacted to the last week’s yuan appreciation by lowering the reserve ratio for forward foreign exchange sales to zero as of October 12. The elimination of the FX forward trading reserve requirement decreases the cost of yuan sales and therefore should decrease appreciation pressures on the yuan. The FX forward reserve requirement was set at 20 % in August 2018 to deal with depreciation pressure on the yuan (BOFIT Weekly 32/2018).

Since late-spring, interest rates have largely returned to pre-corona levels, which makes them clearly higher than current rates in the US or other advanced economies. For example, the yield on China’s one-year government bond is currently 2.7 %, compared to just 0.1 % on a US one-year treasury bill. Chinese stock markets have also generally outperformed the rest of the world. Share prices on mainland China’s CSI 300 are up by 17 % from the start of the year as of Thursday (Oct. 15). The American S&P 500, in contrast, was up by 8 %, the MSCI EM by 1 % and the world average (FTSE All World) about 2 %.

Foreign ownership on the Chinese bond market has risen by 34 % this year (120 billion dollars), bringing the value of total holdings at the end of September to 2.94 trillion yuan (430 billion dollars). That share, however, is still less than 3 % of the market. Since 2017, foreign investors have been able to participate in mainland China’s interbank bond market via the Bond Connect with Hong Kong (BOFIT Weekly 27/2017). Bond Connect trading volume in January-September was more than double compared to the same time last year.

At the end of September, index provider FTSE Russell announced that it was including government bonds issued in mainland China in its World Government Bond Index. The decision should be confirmed next spring and enter into force in October 2021. Analysts estimate the index update to bring in over 100 billion dollars in foreign investment to mainland China. Bloomberg Barclays added mainland China bond issues to its bond index in April 2019. J.P. Morgan followed this year by taking Chinese government bonds into its Emerging Markets Bond Index in February.

The inclusion of mainland Chinese shares in international indexes has also brought foreign assets to Chinese stock exchanges. FTSE Russell concluded the first phases of index expansion this summer. Mainland China A-shares are now included with a 25 % market-value weighting, and correspond to about 6 % of the FTSE Emerging Market Index and 0.7 % of the FTSE Global All Cap Index. The MSCI and S&P Dow Jones have also included A-shares in their indexes in recent years.

Trading by foreign investors on mainland China stock exchanges via the Stock Connect arrangement with the Hong Kong stock exchange has increased, and currently already accounts for about a tenth of the trading volume on the Shanghai and Shenzhen exchanges. The holdings of foreign investors via the Stock Connect programmes has increased slightly this year (by around 130 billion yuan or 19 billion dollars). About 4 % of stock market capitalisation in mainland China are held by foreign entities. While efforts have been made through market reforms in recent years to increase the trading possibilities of foreign investors in mainland Chinese equities and debt securities via different programmes, the possibilities for Chinese investors to invest abroad remain quite limited.

Yuan gained against the dollar this year, while the trade-weighted exchange rate (REER) in August was similar to end-2019 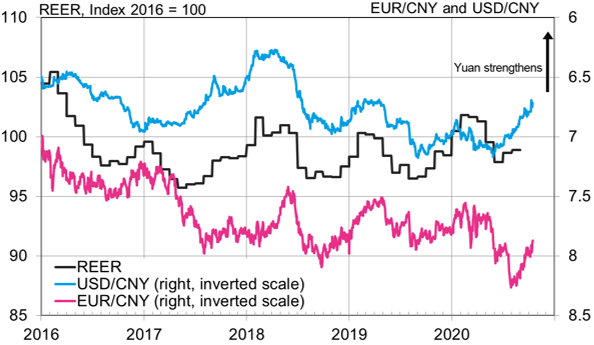