The world’s other leading robot markets are Japan, South Korea, Germany and the United States. These five nations together accounted for over 70 % of all robot installations globally last year. The biggest application branches for industrial robots, car and electronics manufacturing, account for over half of all robot demand. Fewer robots were installed last year than in 2018, however. The IFR estimates that the number of new robot installations is likely to decline further this year, largely due to the coronavirus epidemic.

Robotic automation of production in China has been spurred by rising labour costs that have made the shift to robots economically attractive. Chinese industrial policy supports this trend. Robotics is one of the initiatives in the Made in China 2025 industrial programme. Beyond construction and development of robots, some regions have even offered subsidies to help firms acquire robots. 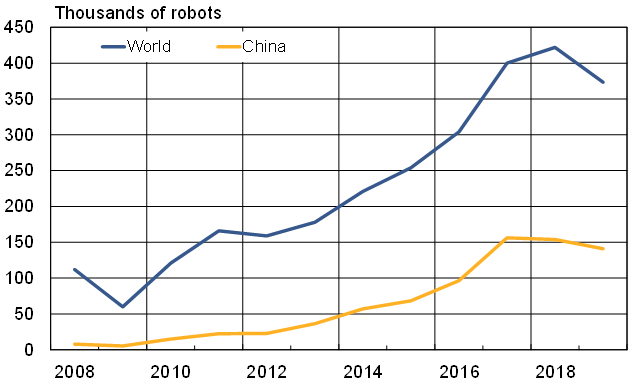