This week's anniversary celebrations of the UK's return of Hong Kong to China included the launch of the Bond Connect programme on Monday (July 3) that was approved in May (BOFIT Weekly 22/2017). The programme permits foreign institutional investors to invest in bonds traded on China's interbank market. China last year broadened opportunities for these investors to trade in the interbank bond market from mainland China. The Bond Connect now eliminates the requirement that investors hold a separate Chinese trading account, allowing investments to be made using Hong Kong accounts without quotas or preapprovals.

Roughly 130 institutional investors had registered with the Bond Connect as of Monday, the first trading day, when the value of trading under the programme totalled 7 billion yuan. As the trading rules are not fully clear, it seems unlikely that the Bond Connect will significantly increase foreign holdings in China's bond markets in the short term. Citigroup and Bloomberg this year introduced mainland China debt securities into some of their narrower indices. Mainland Chinese bonds, however, are not yet included in the major international indices.

Despite recent efforts to restrict capital outflows from China, the bond programme is a step forward in the opening up of China's capital markets to the world. The Bond Connect differs from the Stock Connect programmes in that Chinese investors are still denied access to Hong Kong's bond markets. The central bank says that this policy is not yet ripe for review.

About 90 % of China's bond trade is conducted on the interbank market, where Chinese commercial banks and investment firms account for most of the trading. Bonds can also be traded on China's stock exchanges. The interbank bond market was valued at around 46 trillion yuan (about USD 7 trillion) at the end of June, when China's total bond market was worth close to 70 trillion yuan. Foreigners hold less than 2 % of bonds traded on the interbank market.

With the start of the Bond Connect, the People's Bank of China announced rules to allow foreign credit rating agencies to operate in China. From the foreign investor's perspective, the allowing of international credit ratings agencies to rate Chinese firms is an important step in getting beyond China's tendency to overrate corporate creditworthiness. Currently, it is difficult for foreign investors to evaluate actual corporate risk, so nearly all foreign investments have been made to government bonds or policy bank bonds. 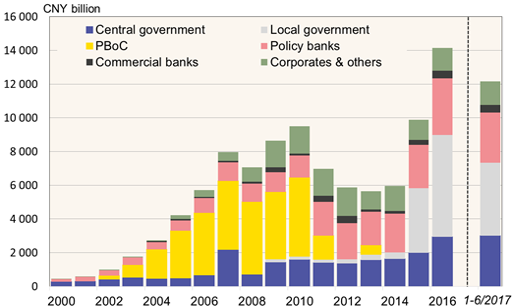