The service sector and primary production were still propping up the Russian economy. Other core sectors showed signs of slowing in September. Preliminary estimates from Russia’s economy ministry suggest that Russian GDP contracted by 3.8 % in the third quarter. For the first nine months of the year, the decline was 3.5 % y-o-y.

Looking at consumption-driven indicators, September retail sales stagnated and were still off by 3 % y-o-y. The exception was new car sales, which increased by 3 % y-o-y. Other service sector branches continued to recover, albeit at a slower pace than in previous months. Services output in September was still down by 12 % y-o-y.

The recovery in industrial output halted in September, dragged by manufacturing. In the mineral extraction branch, which includes oil & gas production, recovery continued at a more subdued pace than up to now. However, the figures for industrial output were revised significantly upward in September for both his year and last year. According to the revised numbers, industrial output contracted by just 3 % y-o-y in the first nine months of 2020, or nearly two percentage points less than previously estimated. In particular, production of machinery, equipment & transport vehicles declined less than recorded in the earlier estimate. This large revision can slightly raise GDP for the first half of the year.

Agricultural output continued to rise in September as it had for all of this year, although more slowly at 1 % y-o-y. Construction output still remained at the same level as a year earlier. In recent months, the engine in construction activity has shifted to residential housing, which, after a sharp drop in the spring, grew by 6 % y-o-y in the third quarter.

Labour market developments were varied. Unemployment went into a slight decline in September, bringing the unemployment rate to 6.3 %. In contrast, growth in real wages stagnated already in August, the last month for which figures are available. Real disposable household incomes fell by 5 % y-o-y in the third quarter. The income figures were also revised in September slightly downwards for this year so far. The purchasing power of Russian households even today is still lower than it was a decade ago. 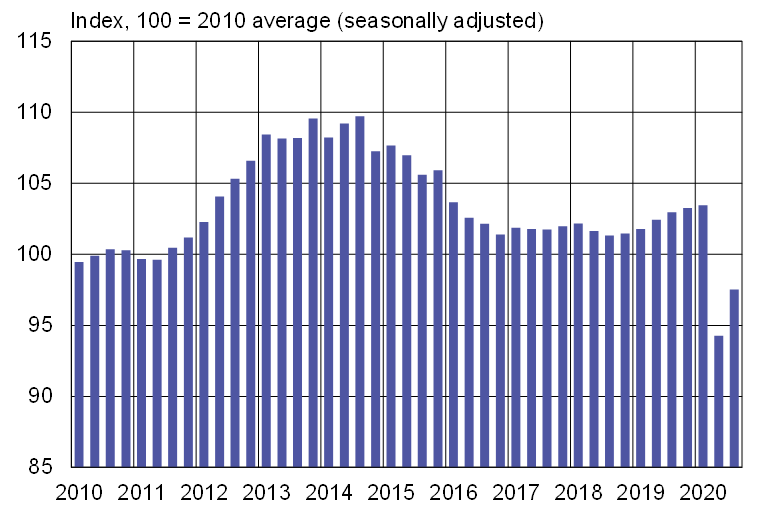