China’s Golden Week autumn holiday (Oct. 1–8) kicked off with National Day on October 1. For two decades now, the festivities have extended for 7 or 8 days. Golden Week is particularly important to retailers and the service sector as Chinese typically travel to destinations elsewhere in the country to celebrate.

The retail story is important because much of the recovery in China since the first wave of the coronavirus epidemic has been driven by manufacturing, exports and infrastructure investment. Recent monthly data show that retail sales still shrank by roughly 1 % y-o-y in August. The Golden Week retail sales number released by China’s commerce ministry suggests modest growth in consumption. Sales of consumer goods during Golden Week grew to 1.6 trillion yuan (over 200 billion euros), a roughly 5 % nominal increase from 2019 Golden Week. Part of the reason for higher domestic consumption this year is the fact that foreign travel was not an option.

Even domestic travel this year was lower than in 2019. During Golden Week, just under 640 million Chinese journeyed somewhere in China. Last year, the number of domestic travellers was about a fifth higher at just over 780 million. Earnings on this autumn travel season were also lower than last year. Golden Week earnings related to domestic tourism last year amounted to 650 billion yuan (80 billion euros). This year’s figure was about a third lower, just 470 billion yuan. 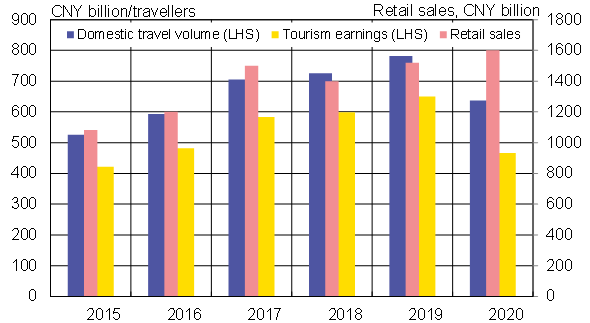