The revised autumn forecasts of the OECD, World Bank, Asian Development Bank (ADB) and IMF all agree that Chinese GDP will grow by about 2 % this year ­ even with an over 4 % decline in global GDP. Indeed, China is the only G20 country expected to see positive growth this year.

Just a few months ago, the prospects on the Chinese recovery were still uncertain. The OECD, for example, still expected in June that Chinese GDP would contract this year. The second-quarter data, however, suggested that the country dealt with the coronavirus better than most expected. While covid-19 spread globally, China could already start to lift restrictions and reopen its production facilities. Exports in recent months have been surprisingly strong and fixed investment has added to the corona stimulus. Nevertheless, the World Bank warns that the allocation of the stimulus is short-sighted which can weaken the country’s economic prospects over the longer term. In particular, the government’s overemphasis on stimulus measures focused on fixed investment rather than consumption are likely to delay structural reforms needed to shift the Chinese economy away from its industrial-based model to a more services-oriented paradigm.

The IMF has raised its economic forecast for China this year to nearly 2 % (up from 1 % growth in its June forecast). The outlook for next year still calls for robust growth of 8 % p.a., a figure well in line with other major forecasting institutions. In the coming years, the IMF sees China’s growth to slow only very little, and expects the growth to normalise at around 5.5 % p.a. in 2025. As in most countries, conditions in China’s public sector finances are likely to deteriorate sharply this year.

Both the OECD and IMF stress that their forecasts are subject to an exceptionally large number of uncertainty factors. How the coronavirus pandemic develops, the timelines for development and rollouts of various vaccines, and the introduction of new therapeutics and treatments are all determinative of how quickly and how completely the service sector returns to normal and how well consumer and corporate confidence returns. The consistent application of stimulus and the financial sector’s ability to withstand strains from the coronavirus crisis are also determinative of how the economy performs.

The outlook for most other emerging economies is still weak. In many of them, income from tourism is important. Disruption of the tourism business damages the economy. Many emerging economies also rely on transfers from abroad, e.g. their citizens working abroad sending payments home to family members. India saw the biggest adjustment in the IMF’s outlook for emerging economies. India’s GDP is expected to contract by over 10 % this year. This June, the forecast was just ‑4.5 %. India, which is among the countries hit hardest by the pandemic, is still struggling to get covid-19 under control. Even so, India’s economy is expected to bounce back rather briskly. While current forecasts for Russia and Brazil have been modified to show smaller contractions in GDP this year, the growth prospects for both countries next year have also been lowered. 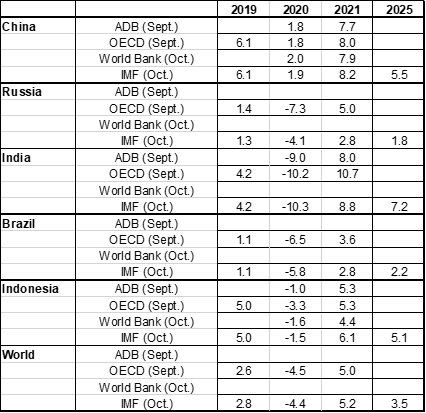