Although the world market price of crude oil remained relatively stable this summer, the prevailing uncertainty surrounding emerging economies placed pressure on the external value of the ruble (BOFIT Weekly 37/2020). Last month, the ruble’s exchange rate came under additional pressure from declining crude oil prices and numerous geopolitical concerns. The unrest in Belarus and the poisoning of opposition leader Alexei Navalny increased the likelihood of new sanctions against Russian entities or persons. The thawing of the frozen Nagorno-Karabakh conflict between Armenia and Azerbaijan and recent unrest in the wake of the Kyrgyzstan presidential election have further increased uncertainty throughout the region, threatening Russia’s economic prospects. All this comes before the US election next month, as well as the upcoming Tajikistan and Moldova presidential elections and Georgia’s parliamentary elections.

At the end of September, the ruble-dollar exchange rate weakened to nearly 80 and the ruble-euro rate to a record level over 90. To ease the depreciation pressure, the CBR announced on September 29 that it would sell 185 billion rubles worth of foreign currency between October and December. The forex operation is related to the CBR’s sale of its majority stake in Sberbank to government in April. In addition, several state-owned enterprises such as diamond giant Alrosa and oil major Rosneft have apparently been instructed by the government to reduce their forex positions to October 2018 levels. The government last ordered SOEs to sell currency to prop up the ruble in late 2014. Following the announcements, the ruble-dollar rate has remained relatively steady in recent days. 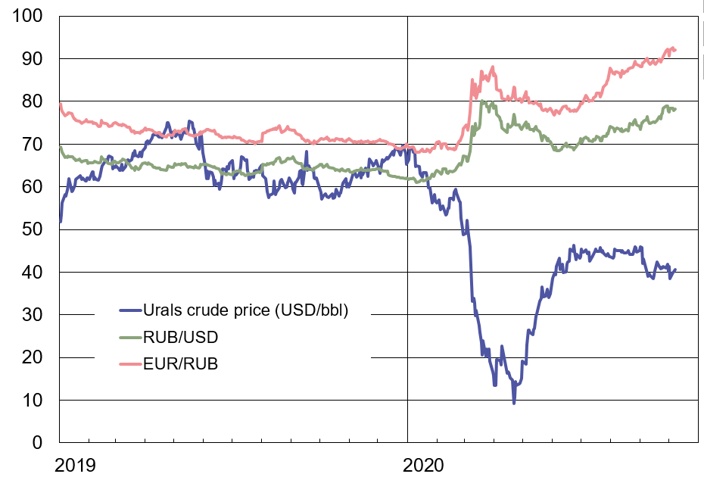