At its scheduled meeting on September 18, the CBR decided to leave the key rate unchanged at 4.25 %. The CBR said the decision not to touch the key rate at this time largely reflected the recent higher than expected increase in consumer prices. 12-month inflation was running at 3.4 % in July, but had climbed to 3.7 % by mid-September. The CBR’s annual inflation target is 4 %.

Over the short term, inflation has been increased by the recovery of the Russian economy with the gradual lifting of coronavirus restrictions (BOFIT Weekly 35/2020). Moreover, ruble’s depreciation in recent months has caused prices to rise (BOFIT Weekly 37/2020). However, over the medium term there seen disinflationary risks as e.g. Russia’s output is less than potential.

The CBR has lowered the key rate by a total of 275 basis points since last September. This is also reflected in market rates. The average rate on ruble-denominated corporate loans of over one year was 7.42 % in July, while loans to private individuals averaged 10.85 % (i.e. both were about 200 basis points lower than a year ago). In its forward guidance, the CBR did not rule out the possibility of a further rate cut at its next meetings. However, CBR governor Elvira Nabiullina noted that the monetary stance will remain accommodative next year, even if most monetary easing had already been implemented.

The CBR’s economic forecast for 2021–2023 has an updated format in the draft version. The central bank earlier prepared the forecast around assumptions related to trends in crude oil prices. Now the baseline scenario is augmented with three alternate scenarios (risk scenario, disinflationary scenario and pro-inflationary scenario) that mainly diverge in assuming on how well the Russian economy is expected to recover from the covid crisis. The view is underpinned by the fact that the Russian economy, due to the government’s fiscal rule and a floating exchange rate, is today less dependent than earlier on crude oil prices. Another visible change in the draft version is the effort on the part of the CBR to expand its communication, particularly through e.g. publication of information and analyses on regional economic development and provision of more detailed information about its economic forecasts. 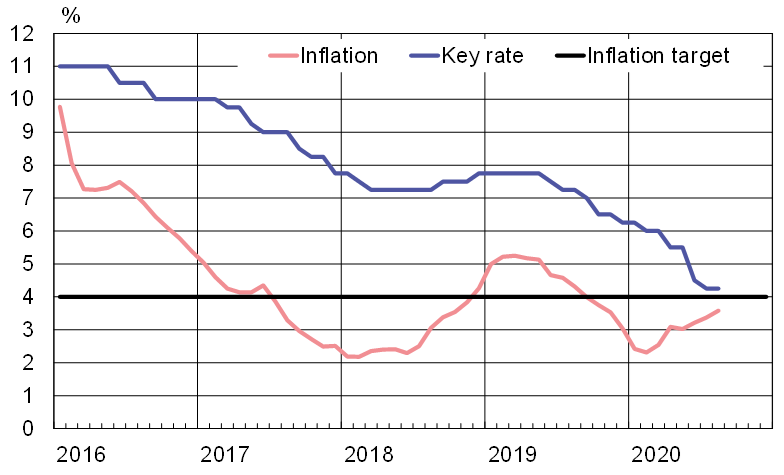