The covid-19 pandemic hit Russia hard this spring, but the impacts were uneven. It now appears that even most of hard-hit sectors are beginning to climb up from their spring lows. Compared to a year earlier, however, output in nearly all sectors was still down in July. The economy ministry estimates that GDP contracted by nearly 5 % y-o-y in July and around 4 % y-o-y in the first seven months of the year.

Consumption-driven service branches experienced sharp declines in the spring. Retail sales in particular have seen a brisk recovery in recent months with the gradual relaxation of coronavirus-related restrictions. July retail sales were only off by 2 % from a year earlier, and new car sales in July recorded even growth from the year earlier. The recovery in several other service branches, however, has been much more modest. Other services were still down by 25 % y-o-y in July. Relatively favourable wage trends have supported the revival of consumer-driven branches as the average wages held nearly stable throughout the second quarter. Unemployment climbed sharply, however, with the unemployment rate reaching 6.3 % in July.

Manufacturing also recovered further in July, while extractive industries remained in the doldrums. Development in manufacturing has varied tremendously across branches, however. For example, production of foodstuffs and pharmaceuticals enjoyed strong growth throughout January-July, while car production dropped substantially. The weak development of extractive industries largely reflects reduced crude oil output due to large cuts in oil production agreed to by OPEC+ countries that were still in force in July. This month, however, Russia is permitted under the arrangement to increase output slightly. Russian natural gas output has also contracted significantly this year.

The coronavirus pandemic seems to have spared agricultural production, which grew at a steady 3 % y-o-y pace throughout January-July. Construction output barely contracted during the crisis period, and in July was just below its level at the start of the year. Residential housing construction, however, declined by 12 % y-o-y in January-July.

Signs of recovery in core sectors of the Russian economy 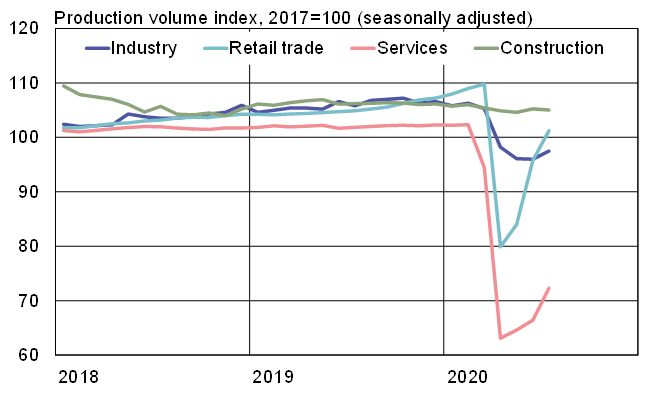