China has reported around a dozen of new infections daily over recent weeks, all of which are said to have originated from abroad. No new covid-related deaths have been reported since May. Perhaps more significant than the official infection figures sign of low infection rates is the fact that China’s has exceedingly relaxed the strict covid restriction measures put in place earlier this year.

Extensive testing and targeted measures to deal with local clusters of infection have allowed economic activity to return to near normal levels. Corona restrictions were imposed and are lifted depending on the local situation. The government remains ready to clamp down at the slightest sign of a local covid outbreak. Cities with infected person are classified as risk zones and subject to specific public health measures. Two weeks ago, for example, a lockdown was briefly imposed on a small city in Yunnan province to deal with a local outbreak.

More stringent measures to restrict the spread of the outbreak have either been significantly relaxed or eliminated altogether. Protective measures and restrictions on capacity restrictions are still in place, and citizens are required to use a corona-tracking app on their phones. Schools began to reopen in some provinces as early as March. At the start of the autumn semester, students across the country have returned to class. Cinemas, as well as some other attractions, were permitted to reopen in most parts of the country in July. In mid-September, theatre occupancy rates were increased to 75 % of capacity.

Domestic travel has largely returned to normal, with the number of domestic flights rising steadily. The number of passengers on domestic flights in August was just 16 % below the number a year ago. (The number of passengers on international flights, however was still down by 97 % in August). The epidemic has caused many to prefer their own private vehicles over public transport. September metro passenger volumes in China’s largest cities, however, were already close to last year’s level. The Golden Week national holiday (Oct. 1–7) is expected to revive domestic travel. Media reports suggest that trips will still be down by about a fifth from last year’s Golden Week.

The biggest remaining restrictions apply to international travel. China cancelled practically all arrivals of foreigners at the end of March. The toughest restrictions have been relaxed in recent weeks. Since the end of September, foreign nationals with valid residence permits have been allowed to enter the country. Prior to that it was required to have a special visa to enter the country. Foreign tourism is still extremely limited as, among other things, all persons arriving from abroad must quarantine for 14 days. During this holiday week, China’s foreign ministry has requested that all citizens refrain from taking trips abroad.

Covid-19 continues to spread quickly outside China. Many countries have imposed new lockdowns or other restrictions to deal with the pandemic. Oxford University’s Covid-19 Government Response Stringency Index considers e.g. the impacts of school and workplace closing, as well as restrictions on movement and group gatherings. The index shows extensive relaxation in China in recent weeks. 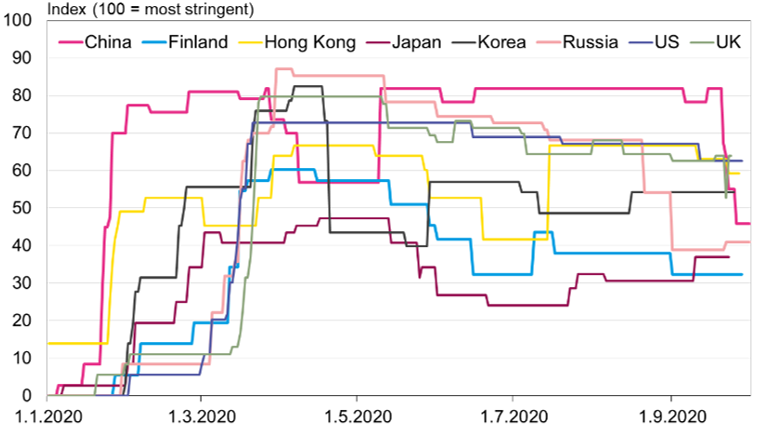