The recovery in consumption-driven branches began to fade slightly in August, while primary production supported the overall economy. Although the Russian economy has recovered somewhat from its spring lows, output in most branches remains well below pre-covid levels. Preliminary economy ministry estimate suggests that the 12-month change in Russian GDP was 4.3 % in August. For the first eight months of this year, GDP contracted by 3.6 % y-o-y.

After an initial rapid recovery, the resurgence in retail sales petered out in August, which, led by food trade, contracted 3 % y-o-y. Recovery slowed down also in trade of non-food goods and other branches of the service sector. Manufacturing output also weakened, dropping by 4 % y-o-y. Unemployment rose slightly, with the unemployment rate reaching 6.4 % in August.

Extractive industries, in contrast, finally began to recover in August. The shift largely reflects a slight easing in the severe cuts in oil production according to the lines agreed in the most recent OPEC+ agreement on production ceilings. Russian oil output last month was still 13 % below its August 2019 level, however. Besides extractive industry production, Russian economic growth has been supported by agriculture, which saw August output increase again by 4 % y-o-y.

August witnessed a divergence in Russian trade and industry trends 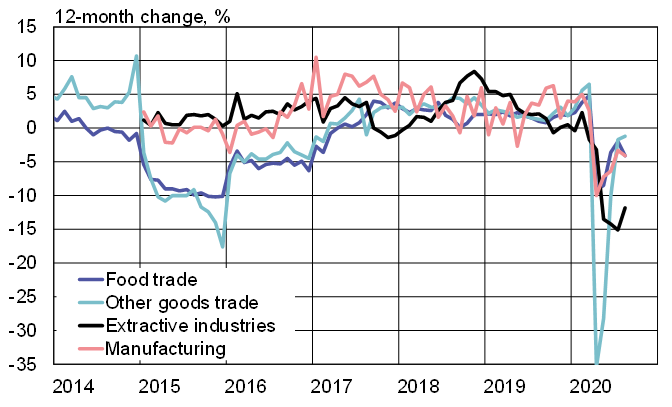