Using the methodology of the International Labour Organization (ILO), Rosstat’s latest survey of the labour force reminded that the numbers of 15 to 72-year-olds employed and unemployed have been shrinking since 2017. This year’s economic recession and coronavirus restrictions have pressed the number of persons employed to a downslide almost as deep as seen during the 2009 slump.

Unemployment increased rapidly in spring, and continued to rise slightly in summer. In July and August, slightly less than 6.5 % of the Russian workforce was officially unemployed, i.e. well above the historical low of less than 4.5 % about a year ago. With economic recovery, the economy ministry now expects the unemployment rate to subside and average 5.7 % for 2020 overall. The number of persons registering as unemployed with the employment offices has risen to a record two-thirds of the unemployed. Part of the surge reflects an increase in spring in the maximum unemployment benefit by one half, even if the maximum monthly compensation is still not higher than about 140 euros. Even if only slightly more than 30 % of unemployed people use the employment office services for job searches, the reliance on job searches at the offices has clearly increased.

The decline in employment is also reflected in groups that share similarities with the unemployed but are classified according to the labour survey criteria to be outside labour force. The number of such persons grew substantially last year and in the first half of this year. Persons ready for work but not seeking a job already earlier constituted a group equivalent to about 2 % of the workforce. That number rose to 2.5 % this summer. Rosstat includes this group as the overwhelming part in potential labour force. Using the ILO methodology, the broader unemployment rate including that potential was about 8.5 % this summer. In addition, the number of persons desiring to work but not ready to start working has been running around 3.5−4 % as a ratio to the labour force since last year.

The corona restrictions last spring fuelled layoffs and caused part-time work to soar. The labour survey found that over a fifth of workers was temporarily furloughed during April-May. The situation turned back in June towards normal levels of a couple of percent of workers. The share of persons with maximum 30-hour work weeks increased in the spring to about 7−8 %, up from the 5 % normal. 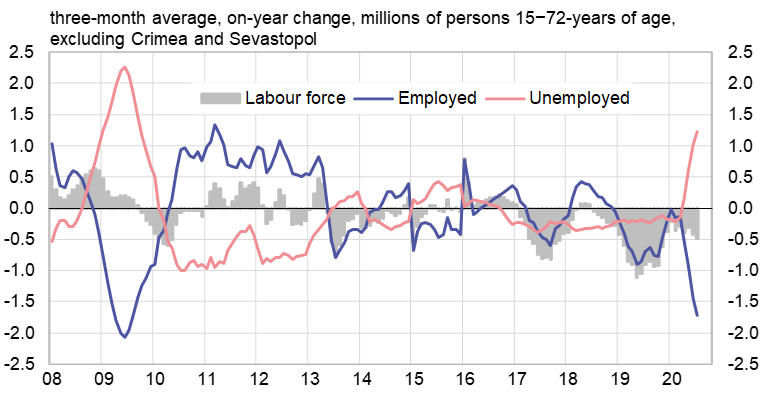