Chinese officials themselves estimate that about 20 % of Silk Road (a.k.a. Belt and Road Initiative or BRI) projects currently under construction have been hamstrung by the Covid-19 pandemic. Projects have had to be delayed, interrupted or scrubbed altogether. In addition, fewer new projects are being green-lighted. According to official figures from Ministry of Commerce, the value of new projects approved in the first seven months of this year was about 7 % less than in the same period a year earlier. Many questions dog the statistical reporting on BRI projects, however. Refinitiv, a global provider of financial data, news and analysis, says that new projects in the first quarter declined much faster than figures show. In the two years preceding the Covid-19 pandemic, Silk Road projects have had headwind as China’s growth slowed, lending policies tightened and Silk Road projects faced criticism from all sides – at home, in borrower countries and in the West.

The BRI has provided project funding for certain poor countries otherwise unable to raise money from the markets due to their low creditworthiness. Refinitiv reports that since 2013 China has loaned roughly $280 billion to 44 countries with bad credit ratings, while it estimates that the total value of BRI project investments is about $1.9 trillion. While the project funding is generally welcomed by recipient countries, China is accused of “debt-trap diplomacy” with poor nations. Worries on the risks related to these loans have been expressed for years in both debtor countries and China, and some loans have already had to be restructured. Payment defaults this year have increased rapidly as the coronavirus pandemic has made debt-servicing challenging for many recipient countries. Most of the five-year loans granted during the 2015–2016 lending peak will come due this year or next year.

Within the context of a debt forgiveness programme for poor nations agreed among the G20 members, China included its own forgiveness effort for loans to poor countries. China’s participation in the G20 joint operation is appreciated as China has traditionally sought to hold private bilateral talks with debtors. The earlier approach raised suspicions that China was holding debtors to stricter repayment rules than other G20 members.

China’s state policy banks such as China Development Bank, the Export-Import Bank of China (Eximbank) and other large state-owned banks, as well as certain government ministries and the state-owned Silk Road Fund (for which the People’s Bank of China provided the bulk of its initial capitalisation and oversees), have provided most financing for BRI projects. China’s risks are heightened by the fact that most loans are granted in dollars. China has tried to promote international use of the yuan, but borrowers want dollars.

The independent research firm Rhodium Group says China will be able to maintain BRI lending roughly at current levels, but is unlikely to increase lending. Instead, China will attempt to diversify the lender base, including attracting financing from privately-held entities. China would also like to reduce the government’s extensive involvement in project implementation. Refinitiv claims that over half of projects are spearheaded by government entities such as state-owned enterprises and that less than a third are led by private-sector entities. BRI projects are likely to be smaller in the future and more focused on emerging areas such as digitalisation, healthcare delivery and environmental remediation. There is also a push to make Silk Road projects more cost-effective. A study released by Chatham House last month rejects the view that China has a malevolently motivated BRI plan, but rather that many BRI projects are not only bad ideas at inception, but tend to be poorly planned, ineffectively implemented and hard to justify from an economic standpoint. In fairness, the authors argue that blame for these failures needs to be apportioned between China and recipient countries. 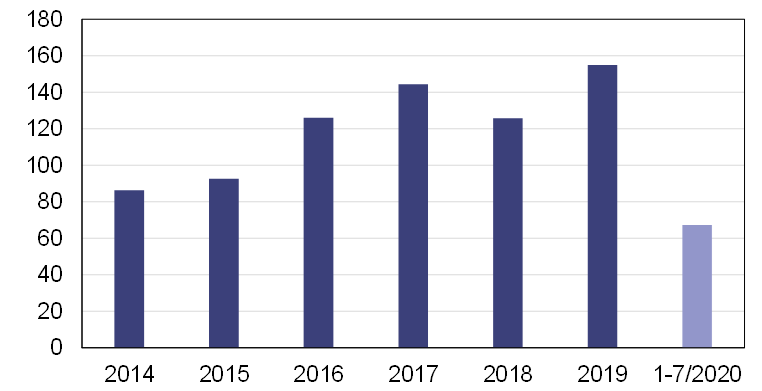