The National Bureau of Statistics reports that manufacturing led a nearly 6 % y-o-y rise in industrial output in August. Fixed investments are also on a rise in monthly terms, even if the nominal value of fixed investment reported in January-August is still less than in the same period in 2019.

Retail sales, a rough measure of domestic consumption, were still down by about 1 % y-o-y in August. The level of retail sales is about 5 % smaller than at end of 2019. Sales of certain non-necessity goods such as cars, consumer electronics, jewellery and cosmetics, rose faster than retail sales generally. This likely reflects changes in consumer demand due to the epidemic, postponed consumption from earlier this year and loss of foreign travel possibilities. The value of sales of restaurant services in August was still down by 7 % y-o-y, however. The drop in restaurant sales was 44 % y-o-y for January-March.

Industrial output has been boosted by soaring international demand in certain export categories such as medical and protective equipment (mask, gloves, etc.), as well as electronic devices. The total value of exports measured in dollars rose by 10 % y-o-y in August, while the value of imports fell by 2 %. The strong export trend and low global commodity prices have caused China’s goods trade surplus to increase rapidly. Despite a record goods trade deficit in February due to the coronavirus lockdown, the cumulative January-August surplus ($289 billion) exceeded the surplus for the same period a year earlier.

The improved demand for industrial sector has eased producer price deflation. In August, producer prices were down by 2 % y-o-y (-2.4 % in July). 12-month consumer price inflation slowed slightly in August to 2.4 % (2.7 % in July). Core inflation (food and energy prices excluded) remained at 0.5 %. 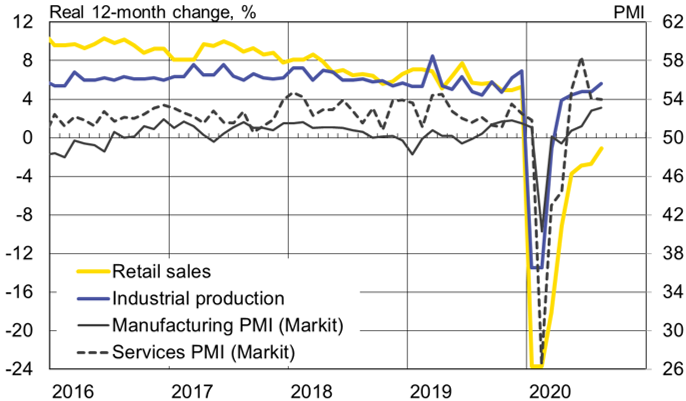