Hit simultaneously with decaying relations between China and the United States, COVID-19 and a new security law imposed by Beijing, the Hong Kong economy continued to stumble in the first half of this year. In the second quarter, GDP contracted by 9 % y-o-y, matching the same downward trend of the first quarter. Private consumption decreased by almost 15 % y-o-y, while fixed investment fell by more than 20 %. In foreign trade, the difference between goods exports (down 2 % y-o-y) and service exports (down 47 %) was particularly striking. Although the recovery of the Chinese economy has supported Hong Kong’s goods exports, travel restrictions have badly hurt tourism, an industry critical to the Hong Kong economy. The lack of tourists is reflected in both service exports and consumption. To support the economy, the government has applied fiscal stimulus that accelerated the growth of public consumption to 10 % y-o-y in the first half.

During a ten-day period in the second half of July the number of new coronavirus infections in Hong Kong topped 100 a day. While that infection rate is low for a city with over 7 million residents, the numbers are big relative to Hong Kong’s first-wave cases in January and the second-wave cases in late March. In response, Hong Kong has imposed strict guidelines on mask-wearing and limited gatherings to just two people. The numbers of daily new infections have dropped slightly since the beginning of August.

On September 6, elections for the Legislative Council of Hong Kong (the special administrative region’s “parliamentary” elections) should select half of the council’s 70 representatives. At the end of July, however, officials announced that the elections would be postponed for a year. The coronavirus situation was cited as the reason for the delay as elections involve large gatherings and create serious risk of infection, particularly for the elderly. Additionally, the government said that some voters living in mainland China would be unable to travel to Hong Kong to vote due to restrictions. The justification for postponing the elections to prevent COVID-19 infections are seen to overstate the challenges of holding the election, and the real reasons for the delay are considered likely political. Suspicions that this was indeed the case were bolstered when several pro-democracy politicians were banned from standing in the election. The BBC reports that opposition representatives have pointed out that delaying a scheduled election for more than 14 days violates the Hong Kong constitution.

China in June moved to impose a new national security act in Hong Kong. The act, which entered into force in early July, gives the authorities significant powers over local and foreign persons and corporations. The official justification from Beijing was a desire to combat terrorism and anti-government actions. The main underlying reason is Hong Kong’s ongoing anti-Beijing demonstrations. The new security act allows a person charged with anti-government activity to be transferred to the mainland for trial, where they face potential sentences up to life imprisonment. Some demonstrators have already been arrested under the new law.

Hong Kong’s GDP has been contracting since last summer 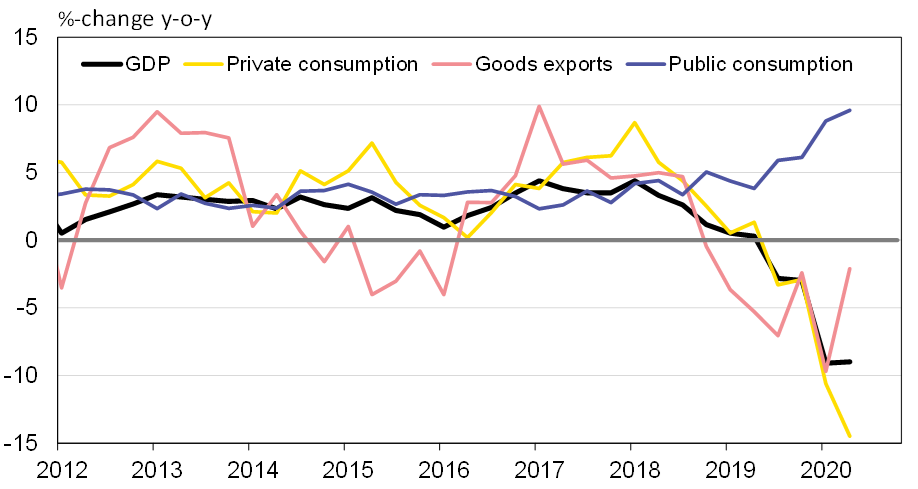