Preliminary Rosstat data show the country’s GDP fell by 8.5 % y‑o‑y in the second quarter of 2020. The drop was slightly less than many forecasters had expected, and more modest than recorded in 2009 following the global financial crisis. Main contribution to the decline appears to have come from a sharp reduction in consumption due to the corona lockdown and other restrictive measures that continued well into June. Consumption was also depressed by weak trends in household incomes and rising unemployment.

For the April-June period, the Russian GDP decline was slightly less than that experienced in the United States or the euro area and GDP contractions in the US and euro area both commenced earlier than in Russia. China experienced a major economic contraction in the first quarter of this year, and official figures suggest that Chinese GDP growth already turned positive in the second quarter.

In Russia’s case, forward-looking indicators initially pointed to a strong recovery in the summer, but some signs of fading have now crept in. Most forecasts at the moment see Russian GDP declining by 5–8 % this year and rising by 3–4 % next year. 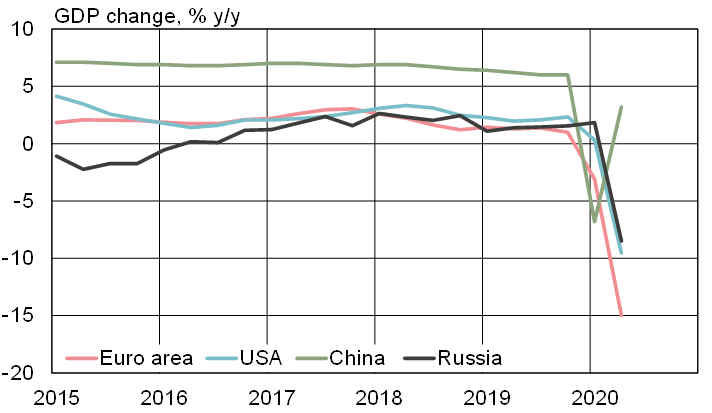