The housing market in China slowed to a virtual standstill in late January and early February with the spread of the coronavirus and subsequent lockdown and mitigation measures. Housing sales came back to life fairly quickly, however. China’s National Bureau of Statistics reports that in May and June, apartment sales volumes in China were up 6 % y-o-y measured in terms of square metres of liveable floorspace. Moreover, the People’s Bank of China noted that the number of newly granted housing loans was exceptionally high, climbing 15 % y-o-y in May and June. The volume of housing construction also picked up in June, with a 10 % y-o-y increase in new apartment building starts.

Regional differences within the housing market remain sizable. In Hubei province, home to the coronavirus pandemic, apartment sales were down over 30 % y-o-y in May and June. Even in Beijing, there were about 20 % less housing sales. In contrast, sales were up sharply in some western provinces. Also Shanghai and its neighbouring provinces saw sales increases of about 20 %. Sales in Hebei province, which surrounds Beijing, have witnessed brisk housing sales lately.

NBS tracking shows apartment prices per square metre were also up an average of 5 % y-o-y in June. Price trends vary considerable from city to city, however, a common phenomenon in recent years. The fastest rises in housing prices (up 15 % y-o-y) were seen in Shenzhen, which lies to the north of Hong Kong, and Tangshan, a city just east of Beijing. In order to calm the Shenzhen housing boom, officials already tightened rules who can purchase apartments from Shenzhen.

Relative to household incomes, housing prices in China are exceptionally high. China’s top leadership, among many others, have been concerned about high prices, as a housing bubble collapse would have costly consequences. This issue seems to have been on the minds of policymakers when they designed policy stimulus measures to deal with coronavirus impacts. For example, measures to assist apartment-buyers such as reducing the size of the downpayment requirement are notably absent from policy measures, despite the fact that housing construction is one of the sectors of the economy. China’s leadership this summer have continued to reiterate the message that apartments are for living not speculation. 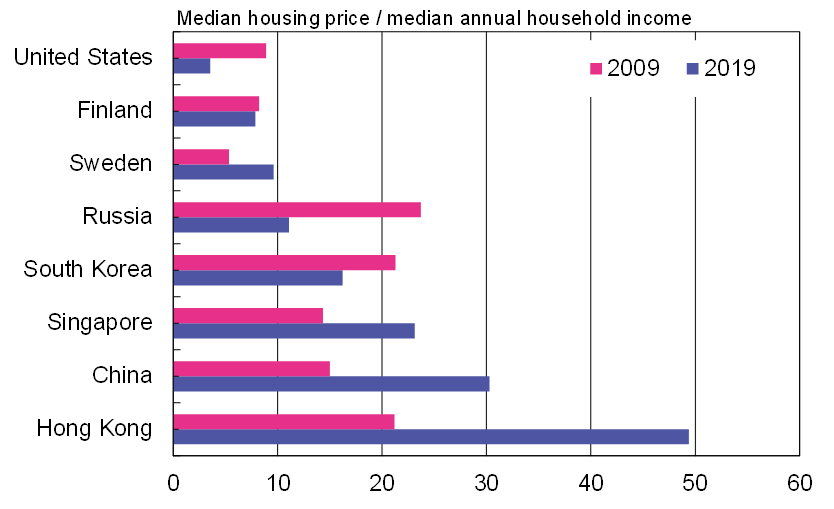