Figures from China Global Investment Tracker, a public database that follows Chinese firms’ FDI transactions greater than 100 million dollars, show that in January-June Chinese outward FDI fell by about 70 % y-o-y. While the figures are sensitive to when individual investments are recorded, the general reduction in investment is indisputable and significant relative to previous years. FDI has fallen in every major geographic region and has concentrated largely on the tech, metal and transport sectors. FDI outflows from China have been on the decline since 2017. The reductions reflect tighter restrictions on Chinese investment abroad, geopolitical tensions and the globally challenging conditions for trade and investment policy.

The UN agency UNCTAD reports that as of end-2019 FDI stocks in China accounted for almost 5 % of all global FDI, while China’s FDI in other countries made up 6 % of global FDI stock. In its June FDI report, UNCTAD forecasted that global FDI flows would fall by 40 % from the 2019 level during 2020 and 2021. The main cause was the impact of the coronavirus, as the lockdowns delayed projects just getting underway, as well as heightened uncertainty and recession expectations that caused investments to be postponed or reduced in scope. UNCTAD also sees localisation of value chains and direct investment in the years ahead as exposure to external shocks and supply security have become central issues for businesses. 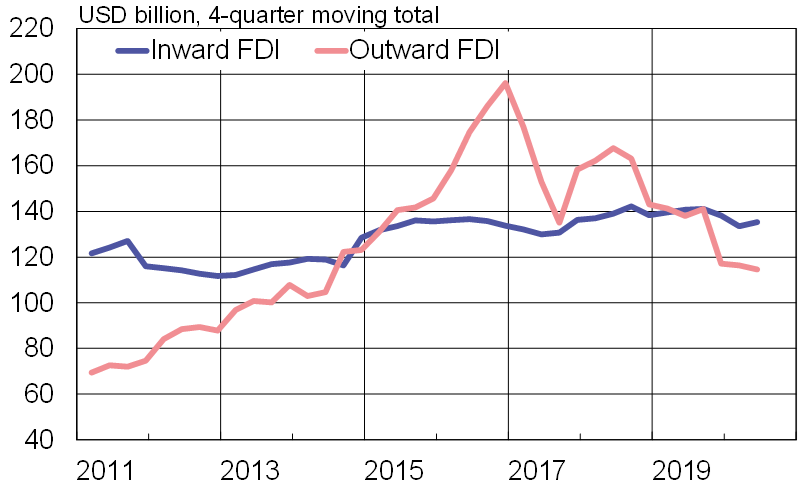