Last Friday (July 24), the Central Bank of Russia’s board of directors decided to lower the key rate by 25 basis points to 4.25 %. It was the fourth rate cut this year. The CBR has continuously relaxed the monetary policy stance since summer last year, and the key rate is now 300 basis points lower than year ago. Economic uncertainty this year had held consumer price inflation well below the CBR’s 4 % inflation target. In June, consumer prices increased by just 3.2 % y-o-y. The CBR board said it expects inflation to pick up slightly towards the end of this year, but should remain between 3.3 % and 4 % next year. This could give room for further rate cut decisions at upcoming CBR monetary policy meetings.

The CBR notes that although monetary conditions have generally eased since the previous board meeting in June, the sudden halt in economic activity caused by a nine-week lockdown and increased uncertainty have tightened access to credit in certain segments. In addition to interest rate cuts, the CBR has e.g. temporarily relaxed solvency requirements of banks in order to support lending. Last Friday, the risk weights were lowered for certain housing credits, systemically important firms, export firms and companies in the pharmaceutical industry.

The CBR board now expects GDP to decline between 4.5 % and 5.5 % this year, which is slightly less than its previous forecast. Even if Russian exports decline sharply this year as expected, the current account should nevertheless remain in surplus. Both domestic and foreign demand are expected to remain weak for most of next year. GDP is forecasted not to return to 2019 levels until early 2022.

Disinflation has provided the CBR with rate-cut opportunities 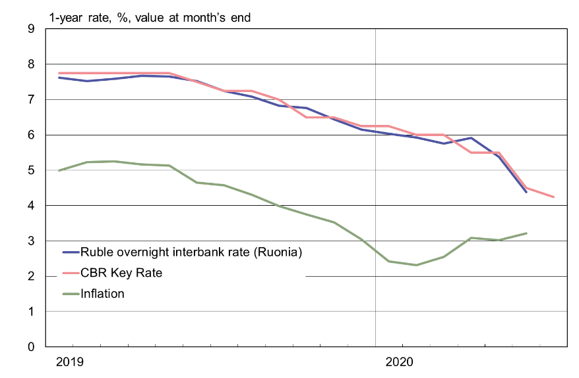