The International Energy Agency (IEA) reports that about 80 % of China’s CO2 emissions are produced from burning coal, and that coal remains the country’s largest primary energy source. China’s 13th five-year plan called for reducing coal’s share of the country’s energy consumption to 58 % by 2020, a target that was in fact achieved already last year. The share is still massive share and the country continues to open up new coal mines and coal-fired power plants. Coal remains a cornerstone for China’s energy independence. This year, China’s National Energy Administration eased rules on approving opening of new coal plants and the government’s coronavirus stimulus response includes large investments in both renewable energy and coal. Regarding coal, the government seeks to phase out old heavily polluting coal-fired power plants and construct new efficient facilities that pollute less. In other words, China’s thinking on fighting climate change diverges significantly from the West, which long ago abandoned China’s modernisation strategy and the notion of “clean coal.” Indeed, China had to drop coal projects altogether from its green bond portfolios (BOFIT Weekly 24/2020).

The IEA also reports that China’s second largest primary energy source, oil, accounts for about 14 % of the country’s CO2 emissions. China remains a major oil producer, but its production is declining. Last year, domestic production was only sufficient to meet 30 % of the nation’s needs. As a result, China has become the world’s largest crude oil importer. China has also become a major petrochemical refiner, exporting considerable quantities of petrochemical products. Like many of the world’s large oil companies, PetroChina Co. is seeking to secure its future through investing on environmentally friendly energy. When some of PetroChina’s oil and gas pipeline and storage facilities are transferred to the newly created PipeChina corporation, PetroChina announced it would use some of the proceeds from the sale on environmentally friendly energy production. The goal is to reduce oil consumption for example by increasing the number of electric vehicles on the road. Overall, the move will have a relatively small climate impact as road transport vehicles only generate about 10 % of the country’s emissions. Moreover, some of the environmental gains from electric cars are lost when coal is used to produce the electricity for charging.

China has committed to the Paris climate accord to the extent that it will cease to increase its greenhouse gas emissions after 2030. China’s plan is to increase the use of renewable energy (mainly wind and solar) to reduce its reliance on fossil fuels over the long run. Renewables currently account for just 5 % of China’s primary energy production. A more effective approach would be to adopt an efficient mechanism for pricing carbon emissions such as the one used by the EU.

In 2017, China decided it would implement a national carbon trading scheme by 2020. The scheme now is expected to be operational by the end of this year or early next year. The Financial Times reports that participation will initially be limited to companies in the energy sector. Such companies account for about half of China’s carbon emissions. The scheme will later be extended to energy-intense industries (particularly steelmaking and cement), at which point the scheme will cover about 80 % of emissions. Regional trials have been underway since 2011, and the experience gained has been used to develop the scheme. Regional participants in the trial phase of recent years include Beijing, Shanghai, Chongqing, Guangdong, Hubei, Shenzhen and Tianjin. Preparations for implementation at the national level has required such measures as developing a regulatory framework and familiarising firms with the scheme. Official climate policy and emissions trading should be clarified during the upcoming 2021–2025 five-year plan. 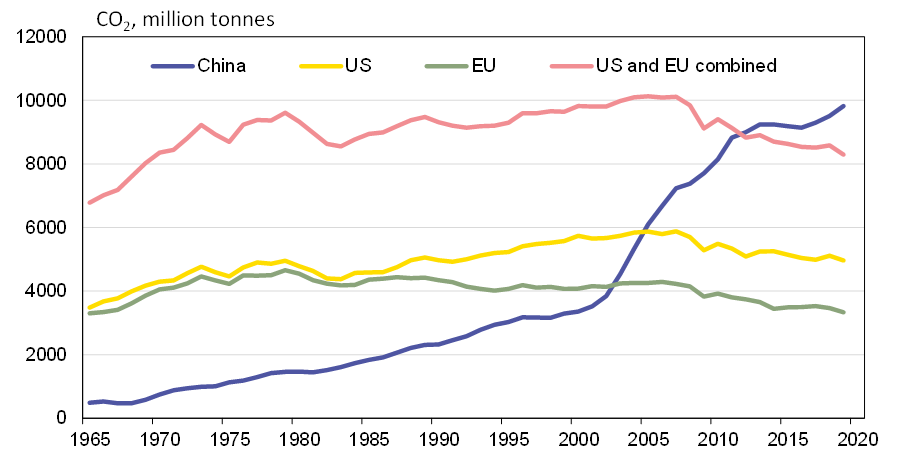