The PBoC is providing financing to commercial banks in order to support the corporate sector in its struggles with the coronavirus crisis. In late January, the central bank allocated 300 billion yuan in special central bank financing to companies critical to efforts in fighting the epidemic and production of crucial supplies. As of end-March, 229 billion yuan (32 billion dollars) in such credit had been granted. Another 500 billion yuan in funding for more general support to firms was also announced in late February, of which 277 billion yuan had already been released as of end-March. In late March, the amount of this additional funding was increased by 1 trillion yuan. China’s policy banks were also provided a separate allotment of 350 billion yuan for lending to small businesses. Banks are required to provide the financing at below-market rates.

The central bank relaxed monetary policy this month with a 20 basis-point cut in the one-year medium-term lending facility (MLF) financing rate to 2.95 %. This rate cut is likely to be extended to the LPR rate used as the reference rate for bank lending. As of end-March, the average lending rate for general loans was 5.48 %, about 25 basis points lower than at the end of 2019.

In line with the government’s earlier announcement, the PBoC also lowered its reserve requirement ratio for small and medium-sized banks by one percentage point. The decrease, which takes place in two steps (April 15 and May 15), should, according the central bank, have an overall liquidity effect of 400 billion yuan (56 billion dollars). After the May cut, the reserve requirement will be 6 % for small banks and at 9.5 % for mid-sized banks, while large banks without bank-specific dispensations will be subject to a 12.5 % reserve requirement. To encourage banks to lend, the PBoC also reduced the interest rate on voluntary excess reserves from 0.72 % to 0.35 %. The annual rate paid on mandatory reserves held by the central bank is 1.62 %.

Growth in consumer prices slowed from 5.2 % in February to 4.3 % in March as the strong rise in pork prices began to abate. Core inflation, which excludes food and energy prices, was up by 1.2 %. Producer prices fell further in March (down by 1.5 % y-o-y). The decline reflects mainly lower energy and commodity prices, but also weak demand.

The opening of the economy has accelerated after lifting of the corona lockdown. The final major restrictions on movement in Wuhan ended on April 8. Schools have already been reopened in some provinces, while in e.g. Beijing and Shanghai, the reopening of schools is set to take place in stages beginning in late April. Companies have been exhorted to ramp up production as quickly as possible. The average citizen is being asked to consume again. In early April, however, various indicators still showed levels of production were significantly lower than in the same period last year. The restarting of the economy seems to be taking much longer than many had predicted. 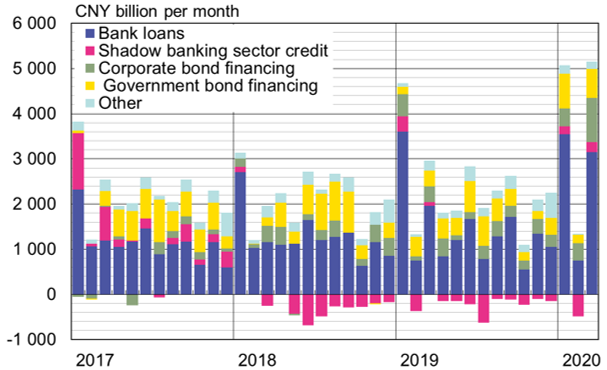