At a meeting on Monday (Apr. 12) of the OPEC+ group of oil-producing countries (led by Saudi Arabia and Russia), the parties agreed to cap crude oil production until April 2022 to support oil prices. The agreement calls for reducing production by almost 10 million barrels a day (mbd) in May and June, and then by roughly 8 mbd for the rest of the year. From 2021 to the end of the agreement period, the production cut will amount to nearly 6 mbd. The combined output of OPEC members and Russia last year was about 40 mbd, or about 40 % of world crude production. The production ceilings are set to reduce the output of countries by up to 25 % in May-June and by about 20 % for the rest of the year.

According to various media reports, Russia committed to cut 2.5 mbd for May-June and around 2 mbd for the rest of the year (which would correspond to a nearly 20 % cut for the May-December period). The agreed cuts, the largest ever, present a challenge for Russia. Oil companies warn that production in sub-arctic conditions and geological factors make it technically difficult to adjust production volumes. Indeed, the cuts are so large that mid-sized, privately-held producers will also be called upon to do their part. This has apparently ignited a heated debate on burden-sharing among producers.

The OPEC+ pledges of massive production cuts did little to calm oil markets. The spot price of West Texas Intermediate (WTI) crude turned negative on Monday as inventories have grown and demand fallen further. Recent weeks have seen an historical widening in the price gap between North Sea Brent crude and Russian Urals-grade crude. On Tuesday (Apr. 21), the price of Urals crude briefly fell below $10 a barrel. 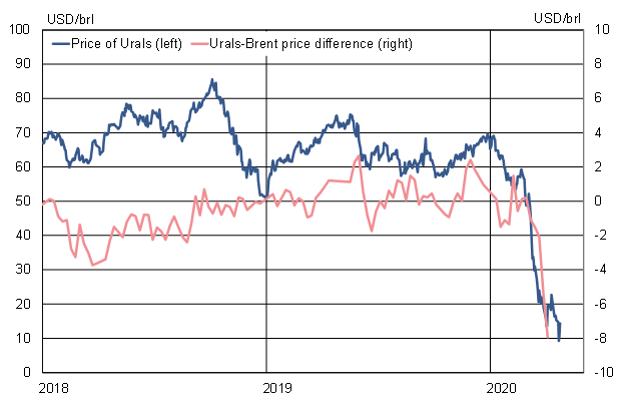