China’s foreign trade first suffered from the domestic shocks from dealing with the emerging COVID-19 crisis, only to then face external shocks as the virus spread to the rest of the world and rocked the global economy. Figures from China Customs show that after a 17 % y-o-y decline in January and February dollar-denominated goods exports fell only by 7 % in March. March’s relative improvement in exports likely reflects the fulfilment of old orders that Chinese companies were unable to ship during the national shutdown from the epidemic. Some observers note that order cancellations only began to rise sharply in the second half of March.

The value of goods exports in the first quarter dropped by 13 % y-o-y, while the value of goods imports sank by 3 %. China's exports to the EU declined by 16 % y-o-y, while imports decreased by 7 %. In contrast, China's imports from ASEAN countries were up by 9 % from the previous year. Imports from the US increased slightly between January and February, but contracted by 12 % y-o-y in March. It is difficult to see how China will be able to buy enough US goods to fulfil its commitments in the “phase 1” trade agreement.

With COVID-19 cases in everywhere in the world, China’s export outlook is bleak. China’s official purchasing managers’ index shows that the volume of new export orders collapsed in February and weakness continued in March. The struggles of other countries are expected to impact Chinese exports full power directly in the second quarter.

The World Trade Organization (WTO) expects the contract of 13–32 % in global trade this year to be followed by a fairly strong recovery next year. The trends in global trade will depend, however, on the duration of the pandemic and extent to which production chains remain intact to facilitate a post-crisis recovery. 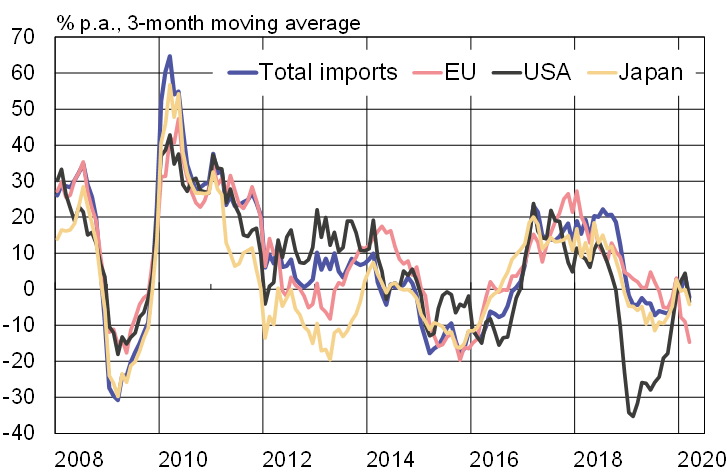