Global concerns and uncertainty generated by the COVID-19 crisis have led to capital flight and currency depreciation in some emerging economies. For the moment, China appears to have been spared from these headaches. On Thursday (Apr. 16), one dollar bought 7.07 yuan and the yuan-dollar exchange rate has weakened only by bit over 1 % from the start of the year. As the yuan has appreciated slightly against many other currencies such as the euro, yuan’s nominal effective (trade-weighted) exchange rate (NEER) has strengthened by around 3 % since the start of the year.

The maintaining of a relatively stable exchange rate is an important goal for Chinese policymakers in good times, and it takes on particular importance in times of trouble. In the 2008–2009 global financial crisis, China pegged the yuan to the US dollar. During the capital flight episode of 2015–2016, the PBoC supported the yuan through massive forex market interventions and tighter capital controls. It is unclear how much the PBoC has done to support the yuan during the current pandemic. In the first three months of this year, China’s foreign exchange reserves remained virtually unchanged, suggesting that the central bank had directly done little, if anything, to support the yuan’s exchange rate through forex sales. There has not been mentions about tightening of capital controls either. However, other exchange-rate-stabilising measures might be in place. For example, officials might have given instructions to the large state banks, which are important actors in fixing the yuan’s exchange rate. 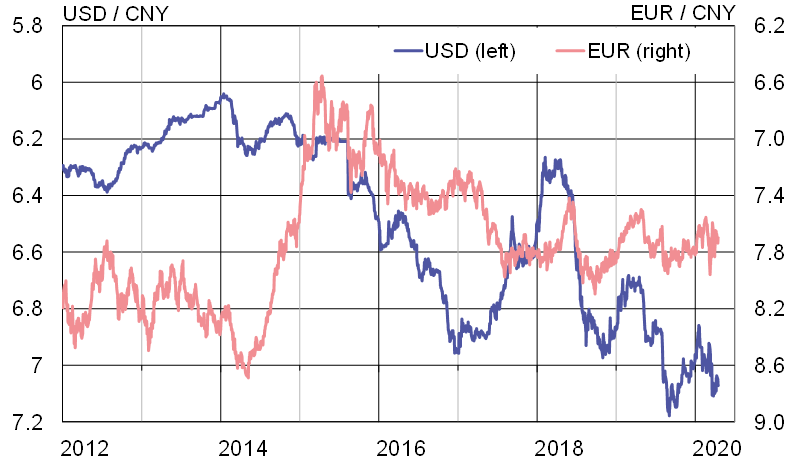