The yuan lost just over 1 % of its value against the US dollar over the course of last year, ending 2019 at a rate of 6.96. The yuan’s nominal effective (trade-weighted) exchange rate, or NEER, also declined by just over 1 %. The euro-yuan exchange rate at the end of the year was about the same as at the start of the year.

The yuan-dollar rate last year moved in concert with advances and setbacks in ongoing US-China trade talks. The yuan strengthened slightly at the beginning of last year as the talks moved in a favourable direction. As the trade war heated up, however, China let the yuan depreciate to a rate above 7 yuan to the dollar in August in response to new tariff hikes imposed on Chinese imports by the US. When news came in December of a possible “phase 1” trade truce, the yuan appreciated slightly.

The trade-weighted China Foreign Exchange Trade System (CFETS) index, the PBoC’s official currency index, weakened by about 2 % last year. CFETS, which is overseen by the central bank, updated its currency weightings from the start of the year in accordance with 2018 foreign trade data. After the update, the dollar weighting was lowered from 22.4 % to 21.6 %, while the euro weighting was increased from 16.3 % to 17.4 %.

The CFETS index was introduced at the end of 2015. It had its first update at the beginning of 2017, when a number of new currencies were added (BOFIT Weekly 01/2017). The CFETS currency basket presently comprises 24 currencies. Central bank guidelines say the index should be used e.g. by the 18 market-making commercial banks that set quotations for the yuan-dollar exchange rate  the PBoC’s uses in determining the daily yuan-dollar fixing rate and the upper and lower bounds (±2 %) of the exchange-rate band around the fixing rate. In practice, the CFETS index plays a minor role in currency markets as markets prefer to follow trends in the dollar’s exchange rate. 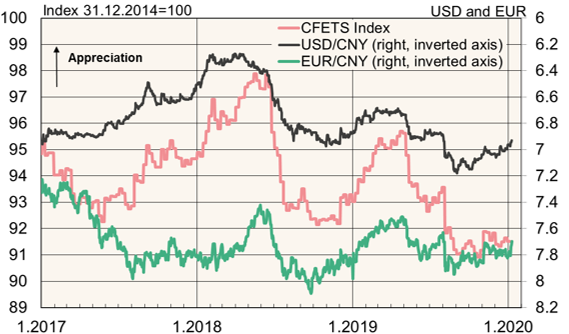