The People’s Bank of China announced last week that from the start of 2017, its China Foreign Exchange Trade System (CFETS) RMB currency basket would be expanded from 13 currencies to 24 currencies. The added currencies are the Korean won, Turkish lira, Mexican peso, South African rand, Hungarian forint, Polish zloty, Swedish krona, Danish krone, Norwegian krone, as well as the Saudi Arabian riyal and United Arab Emirates dirham, which are both pegged to the dollar. The practical effects of basket expansion on the CFETS RMB index are likely to be minor. Moreover, it is still unclear whether there is any real need for the RMB currency index announced in December 2015 or what purpose it serves. The use of an index based on a large currency basket is not user-friendly, and dollar’s central role remains in any case. On every trading day, the PBoC announces its daily “fixing” rate against the dollar, and allows yuan to fluctuate within a 2 % band from the fixing that does not trigger central bank’s automatic intervention. Market-makers report their anticipated fixing rate for the next day, which since the summer 2015 reform should be based on the previous day’s ending rate and forecast forex supply and demand in the markets. Besides the CFETS RMB index, the PBoC publishes indexes based on BIS and SDR currency baskets.

During 2016, uncertainty over the performance of the Chinese economy accelerated capital outflows and caused the yuan’s exchange rate to weaken 6 % against the dollar and 4 % against the euro. The real effective (trade-weighted) exchange rate, or REER, which reflects the price competitiveness of Chinese goods, was down 7 % y-o-y in November.

To quell depreciation pressure on the yuan, China has tightened capital controls and increased their oversight as well as intervened in forex markets. Interest rates are rising on both domestic money markets and in Hong Kong, where the offshore CNH 7-day interbank rate today (Jan. 5) rose to 18 %. Media reports suggest that China is planning further measures to deal with depreciation pressure on the yuan. The yuan’s exchange rate has strengthened in recent days. Today, one dollar bought 6.88 yuan and one euro 7.26 yuan. 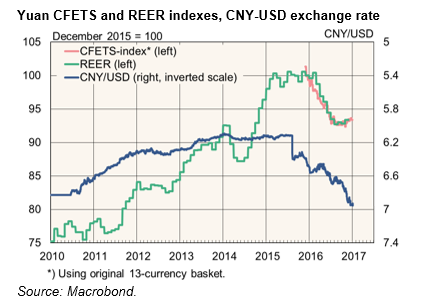